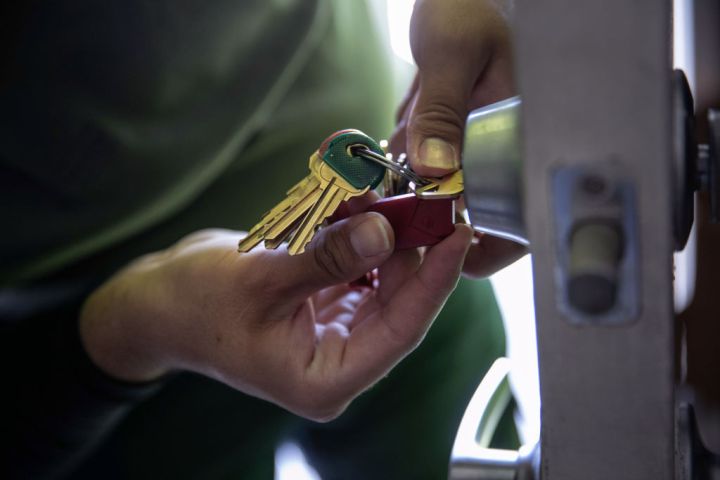 COPY
A maintenance worker changes the lock of an apartment after an eviction order is posted on Oct. 7, 2020, in Phoenix, Arizona. John Moore/Getty Images
Economic Anxiety Index®

A maintenance worker changes the lock of an apartment after an eviction order is posted on Oct. 7, 2020, in Phoenix, Arizona. John Moore/Getty Images
Listen Now

Charles White owns an ice cream truck business in Memphis, Tennessee, called Boss Creamz. Compared to this time last year, he said “business here has been down at least 50%.”

Even in the heat of summer, fear of the coronavirus kept a lot of customers away, White said. He had to keep two of his three trucks idle and lay off three workers. His wife just had hip surgery and can’t work. And now that the weather’s getting cooler, “I think I’m going to have to catch me a second job, but I can’t do nothing until my wife is able to get up and walk around,” he said.

White is one of the nearly 20% of Americans who said they’d missed at least one rent payment in the past six months, according to the latest Marketplace-Edison Research Poll. Many more — 64% — said they fear missing a payment in the future.

White, 49, is three months behind on the $850 rent for his house, which he shares with his wife and four children. His landlord is an old friend, so he’s been patient.

Anthony Pino’s landlord has not.

“He’s even been charging me late fees,” Pino said. “He raised my rent during all this.”

Pino, 45, runs a tile business in Bridgeport, Pennsylvania, and had to shut down for a few months when the state put a halt to most construction. He’s been back at work since June, but said business is still half what it should be this time of year. Now two months behind on rent, Pino said he may have to find another place to live.

“Or me and my landlord are going to go to court because I know he can’t evict me right now with this pandemic going on,” he said. “I don’t know what’s going to happen. I really don’t.”

Right now a national moratorium on evictions from the Centers for Disease Control and Prevention protects renters from being removed from their homes if they’ve can’t pay. The Trump administration is allowing property owners to start the eviction process by filing with the court, though, said Emily Benfer, a law professor at Wake Forest University.

“In doing this, they thwarted the purpose of the order itself to prevent the spread of COVID-19,” she said.

Many renters will do anything to avoid the eviction system, Benfer said, so they moment they receive a notice, they leave.

In the 17 cities tracked by the Eviction Lab, property owners have filed for more than 60,000 evictions during the pandemic. When the CDC moratorium expires at the end of December, Benfer said, “we can expect that evictions will increase to unseen heights.”

Even when the rent does get paid, often something else doesn’t.

Back in June, Marketplace spoke to Juliana Sandridge, 40, from Broken Arrow, Oklahoma, outside Tulsa. She’d lost her job and was facing eviction while she waited for unemployment benefits to come through. They finally did, but in order to catch up on her rent she missed utility bills.

“My water was shut off for a little while, for about two-and-a-half, three weeks, maybe,” she said. “My electric’s been shut off probably three or four times for a few days at a time.”

Sandridge has four kids still at home and a 15-month-old granddaughter. She still hasn’t found a new job and said she worries constantly. She’s counting on Congress to make a deal for more relief, a prospect that looks increasingly dim before the election.

“I’ve gained weight from just stress. I’ve broke out, I can’t sleep,” Sandridge said. “It’s not so much I’m worried about myself because I could get by, but you know, you don’t want that for your children.”