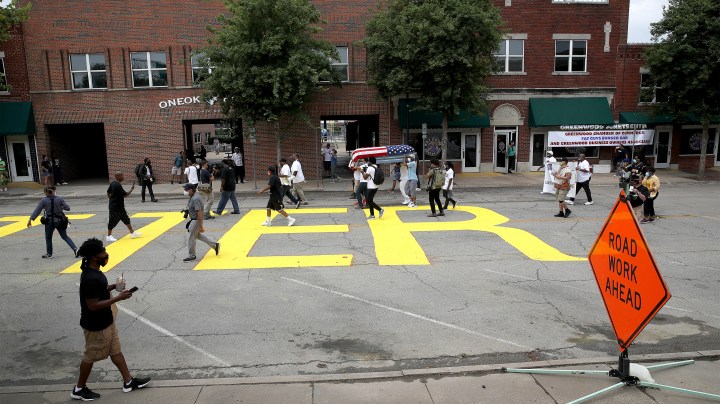 COPY
During a Juneteenth march in Tulsa, Oklahoma, on Friday, people carry an empty, flag-draped casket to symbolize the destruction of Black Wall Street in the 1921 Tulsa Race Massacre. Win McNamee/Getty Images
Race and Economy

During a Juneteenth march in Tulsa, Oklahoma, on Friday, people carry an empty, flag-draped casket to symbolize the destruction of Black Wall Street in the 1921 Tulsa Race Massacre. Win McNamee/Getty Images
Listen Now

Julie Sandridge has been renting the same brick house in Broken Arrow, Oklahoma, just outside Tulsa, for 16 years. It’s where she raised her six children, four of whom are still living at home, along with a baby granddaughter.

Then in February, Sandridge, 40, got sick and missed several weeks of work. When she finally returned to her job in IT customer service at BlueCross BlueShield, she said, “I went to work for one week, and then the pandemic hit and they shut us down.”

By early April she was two months behind on her $850 per month rent, when she found a letter in her mailbox. Her landlords had given her until the end of the month to pay or be evicted.

“I’m the only breadwinner in the family, so it was pretty stressful on me to wonder where I’m going to go, what I’m going to do,” she said. “I can kind of understand their position. I just thought it would be better than that.”

There are thousands of stories like this in and around Tulsa. A few years ago a report from the Eviction Lab at Princeton University found that city had the 11th-highest eviction rate in the country. Nearly 8% of households face an eviction each year.

“We knew it was bad,” said Jeff Jaynes, executive director of Restore Hope Ministries, a nonprofit rental assistance agency. “We didn’t know it was 11th-in-the-country bad.”

And that was before the pandemic. While the CARES Act imposed a temporary moratorium on evictions of residents living in federally subsidized apartments or properties with federally backed mortgages, that hasn’t stopped other evictions from piling up. The Tulsa County courthouse reopened for hearings on June 1 with more than 1,200 cases pending. Tenant advocates are calling for a statewide moratorium on evictions.

While rents are relatively low in Tulsa, Jaynes said, so are wages. And more than 15 percent of Tulsans don’t have health insurance, one of the highest rates in the country, so an illness can quickly become a financial emergency.

“Many of the people who we see that are facing eviction have a medical issue or a health issue,” Jaynes said.

On top of all that, he said, the entire eviction process in Tulsa County favors landlords. It’s relatively easy and cheap to file an eviction, landlords don’t have to show up at hearings, but still usually win, and there’s money to be made.

“I heard about a case this morning of somebody who has been filed on 20 times since 2016, by the exact same landlord,” Jaynes said.

Each time, the tenant managed to pay the rent, but the extra fees added up to almost $4,000.

In fact, of the $325,000 Restore Hope paid landlords last year on behalf of tenants, almost 10% was for fines and fees.

Those fees are necessary to cover a landlord’s expenses, said Keri Cooper, executive director of the Tulsa Apartment Association, which represents property owners. “If that housing provider can’t pay their mortgage on a certain date or can’t pay their employees and they have to take a loan, there’s costs associated with taking rent late,” she said.

The legacy of racial discrimination also plays a role in the high eviction rate, said Becky Gligo, Tulsa’s director of housing policy. Though the courts don’t track evictions by race, “we know that persons of color in Tulsa are experiencing higher rates of homelessness compared to their white counterparts in Tulsa, and we believe that that is directly related to the eviction crisis,” she said.

Gligo was hired a year ago to address the crisis. One strategy: Resolve landlord-tenant disputes before they get to court, using data and behavioral science.

Examining water-billing records, for example, showed that tenants who fall behind on their bills are far more likely to face eviction. So the plan is to send those renters text messages about ways to get help.

Carolina Toth is an adviser with the Behavioral Insights Team, a company unofficially known as the Nudge Unit. Research has shown that a gentle “nudge,” often in the form of a text message or email, can influence behavior and improve outcomes. With funding from Bloomberg Philanthropies, BIT is working with Tulsa and other cities to apply this research to social problems like eviction.

“The simple act of of sending somebody a text message, delivering it to them in a time frame that makes sense to them, in language that is clear to them and compelling, non-stigmatizing and encouraging, can really increase the uptake of social services,” Toth said.

They’re also trying to nudge landlords to use a free mediation program instead of the courts. In a recent test, the city sent out different email messages to property owners and managers, to see what worked.

There was the straightforward approach, directing landlords to the mediation program and other resources for avoiding eviction. Another tactic tried peer pressure. “More and more landlords are reaching out for resources when tenants can’t pay,” the headline read.

And finally, an appeal for empathy. “Landlords and tenants are both struggling to pay their bills,” the message said. “Here’s what landlords can do.”

That one got the best response, Toth said.

Whether that’s enough to stave off an eviction notice, local charities aren’t waiting to find out.

Restore Hope Ministries covered most of Julie Sandridge’s missed rent while she waits for her unemployment checks to start arriving, enough to stay in her home for now.

“So I’m kind of breathing a little easier right now and just hoping that that unemployment kicks in pretty soon,” she said.

On Friday, Oklahoma Gov. Kevin Stitt announced a new rental assistance fund, offering grants of up to $3,600 per household during the COVID-19 pandemic. Meanwhile, a foundation has agreed to pay the rent for hundreds of Tulsans who had pending evictions before May 31. But there’s a catch: Landlords have to agree not to file another eviction for three months. Restore Hope’s Jeff Jaynes said some landlords have already turned the offer down.