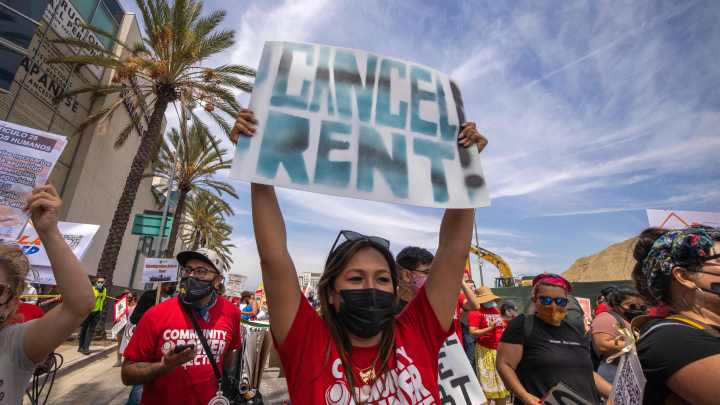 COPY
With the CDC eviction order set to expire at the end of June, renters are scrambling to pull together back rent. David McNew/AFP via Getty Images

With the CDC eviction order set to expire at the end of June, renters are scrambling to pull together back rent. David McNew/AFP via Getty Images
Listen Now

Janet, a Houston renter, lost her job as a home health care worker when a major winter storm hit Texas in February. When she couldn’t take the icy roads to work, she was fired. She had already lost jobs and income during the pandemic and it wasn’t long before she couldn’t pay rent.

“It’s been hard. I’ve gone days without sleeping. You know? You can’t sleep, you don’t know what’s going to happen,” Janet said. We are not using her full name because of her immigration status, and because she says she fears retribution from her landlord.

Her landlord filed to evict her. Janet sent a form to her landlord and the court to pause the case under the CDC’s federal eviction order. She also applied for two rent relief programs: one administered by the state of Texas, and another jointly administered by Harris County and the City of Houston.

Houston has had a high number of evictions during the pandemic, with over 30,000 eviction cases filed since last March, according to the consulting group January Advisors.

Unlike some other cities, Houston never put a local eviction moratorium in place during the pandemic. The Texas Supreme Court enacted a brief moratorium, but it ended over a year ago. The federal CDC order hasn’t stopped most evictions in the Houston area.

Her landlord contested the form in court, arguing Janet wasn’t eligible for protection, but a judge ruled she could stay — at least, for now.

Janet repeatedly asked her landlord to apply with her for state and local rental assistance, but said he refused to participate. Her landlord did not respond to a request for comment.

Janet wasn’t only worried for herself.

“There are other tenants who would not have received assistance because they refused to get on the bandwagon. How dare they. Shame on them. Throwing people out in the middle of a pandemic, how dare they,” she said.

With the CDC order currently set to expire at the end of June, she said she feels she’s racing to catch up on rent in time.

Brian Cweren, principal attorney with the Cweren Law Firm, has represented many Houston landlords who are reluctant to participate in rent relief programs. Cweren said there are several reasons for that — some landlords would rather evict than deal with delays and red tape.

“In general, kind of fatigue and wanting to get residents who have not paid rent for a long time out of the community,” Cweren said. “A second is just a fear of losing their place in line with the eviction courts.”

A survey from the National Low Income Housing Coalition found that nationwide, 90% of rent relief programs were set up for money to go directly to the landlord, and half the programs reported they were struggling with landlord participation.

Cweren said if government officials really wanted the programs to work, they’d be making direct payments at the courthouse.

“Talk to the landlord in the hallway while the case is on hold for a few minutes,'” Cweren said. “Turn to the tenant — ‘do you agree?’ ‘Landlord, do you agree on this number? Here’s your check.'”

Towards the end of 2020, there was a registry with around 8,000 renters who weren’t eligible for relief money yet because their landlords weren’t enrolled in the program, according to BakerRipley, one of the local nonprofits managing Houston’s program.

Last year, the program did not allow for payments to go directly to the tenant. But Rene Solis, chief program officer with BakerRipley, said the the rules have changed and renters no longer need landlords to participate. Renters facing eviction can get the same amount of relief whether or not their landlords participate, he said.

But there is a lot of demand — the $159 million program has received more than $200 million in requests, Solis said.

Houston city council passed an eviction grace period in February to give renters more time to receive that money and pay rent.

“I do not think people ought to be evicted when these dollars are coming, in this time period, because the dollars are there,” Houston Mayor Sylvester Turner said.

But an analysis of eviction data by the consulting group January Advisors found that the grace period had little effect on stopping or delaying evictions before it expired at the end of March.

BakerRipley said around 80% of applicants to the local program have been selected and are moving through the pipeline. But some renters, like Janet, are still waiting.

“Most folks have not had to wait that long,” Solis said. “It really depends on two factors. One is your priority, which is essentially a designation of your vulnerability. And the second thing is just the lottery, when your name gets pulled out based on your priority.”

Janet, the Houston renter, said she is still waiting on her relief, but she finally got some good news. She has an offer from the state’s $1 billion rent relief program — though it requires she stay with her current landlord as long as she’s receiving the funding. The state’s fund is just getting going. Janet is waiting to receive more than $6,000 to pay past and future rent.

The offer wasn’t Janet’s only good news — she was relieved to say she’s also just started a new job.