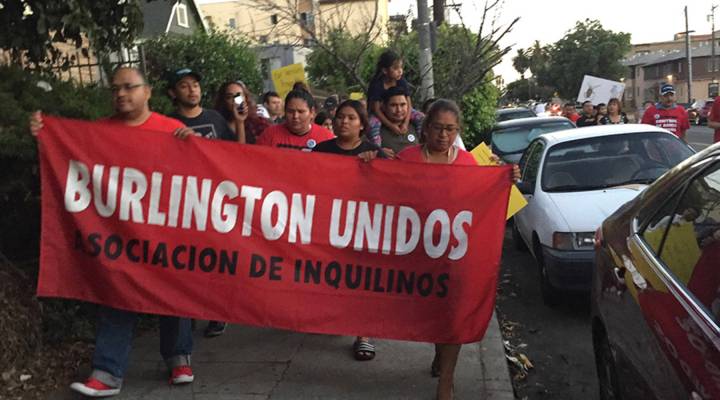 In the growing cities of the early 20th century, rent strikes were a common tool to protest conditions in crowded tenements. But the practice is making a modern-day comeback in cities faced with a housing shortage and rising rents.

It was bad news when Joana Ochoa’s landlord told her back in January that her monthly rent would go up by $100 in her 200-unit apartment complex west of downtown. But the alarm bells really started going off in April, when the rent went up again another $250.

“Everybody started thinking, ‘Whoa, this is too much,’ ” Ochoa said.

“That’s when us tenants started realizing ‘Oh, no, no, no, no. Something’s wrong. This is not right,'” she said. “That’s when we started getting information and started, you know, the strike.”

Striking Westlake tenants and organizers protest in front of the Burlington in late July.

A rent strike. To pressure their landlord into negotiating rental rates and addressing neglected upkeep, tenants in about 80 units stopped paying rent. On a recent summer evening, about 200 residents and activists marched through the neighborhood in protest. One of them was Trinidad Ruiz, a volunteer with the LA Tenants Union.

“You have tenants who have been living in deplorable conditions for many, many, many years, and now the landlord is raising their rents, and its caused a crisis with the tenants,” he said.

Ruiz’ group teaches renters their legal rights, like how in California they can withhold rent if a landlord fails to properly maintain a building.

“All they have are their rent checks,” he said. “So they use that because they really don’t have any other recourse.”

In a written statement, landlord representative FML Management said the rents had been raised to cover operating costs.

LA’s not the only city to see rent strikes. A check of the web turned up reports of similar actions this year in San Francisco; New York; Houston; Washington, D.C.; and Portland, Oregon.

All places you’d expect rent strikes to be if you’re Michelle Wilde Anderson, a Stanford professor who studies urban poverty.

“These are places we can think of as job-rich and housing-poor.”

That is, metro areas that have added many more new jobs and residents than housing units — the classic recipe for higher rents.

“The rent levels and the housing conditions have gotten so far out of whack with each other that people basically start yelling from their windows that they’re not going to take it anymore,” Anderson said.

In a recent tour of Burlington apartments, Ray Estrada pointed out rotting walls soft to the touch and cracked surfaces showing mold underneath. In the parking garage, residue from sewage overflows clings to the walls and pipes.

“We’re not just complaining where we just want to get free rent,” he said. “We want to pay our rents, but we want to live in a safe environment.”

In its statement, FML Management said all maintenance requests are handled immediately.

But rent strikes don’t come without risks. In the case of the Burlington apartments, the landlord moved to evict the striking tenants. In September, many of those suits were dropped after tenants agreed to pay what they could in back rent. But at least three tenants were evicted.

A version of this story originally ran on LAist.