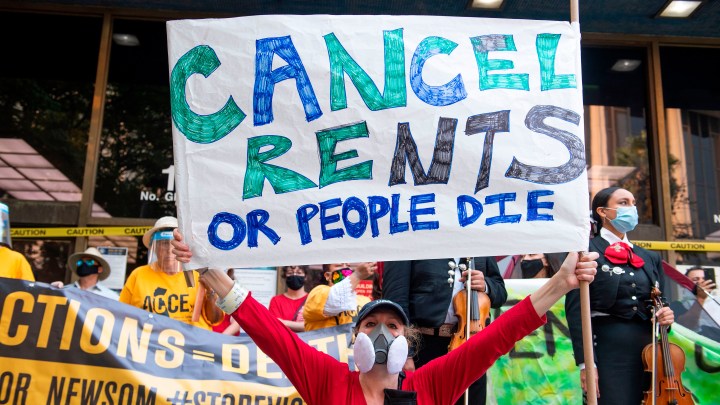 COPY
Renters and housing advocates attend a protest to cancel rent and avoid evictions during the coronavirus pandemic, in Los Angeles, California, on Aug. 21, 2020. Valerie Macon/AFP via Getty Images
COVID-19

Renters and housing advocates attend a protest to cancel rent and avoid evictions during the coronavirus pandemic, in Los Angeles, California, on Aug. 21, 2020. Valerie Macon/AFP via Getty Images
Listen Now

As bad as this pandemic is, the economic consequences are set to get a lot worse, particularly when it comes to housing.

Local eviction moratoriums are winding down all over the country, and the federal one from the Centers for Disease Control and Prevention ends on Dec. 31. According to the Census Bureau’s Household Pulse Survey they’ve been doing during the pandemic, about 33% of people in the U.S. are at risk of eviction or foreclosure. And rental debt is piling up.

Paying rent used to be no big deal for 65-year-old Graciela Wade in Chicago. She’s retired and on a fixed income, but was getting help with bills from her granddaughter and her granddaughter’s then-girlfriend.

Then the pandemic hit.

“But with my girls losing their jobs, and me not being able to keep up with everything, just makes it worse,” she said.

Wade hasn’t paid rent since July and is now $3,500 behind and at risk of eviction. Just like about 14 million other households, said Emily Benfer, who leads the American Bar Association’s task force on COVID-19-related evictions.

“The mere fact of filing actually plummets credit scores, and it precludes people from seeking a mortgage in the future or a car title or even seeking employment,” Benfer said.

Plus even after someone is evicted, the debt stays with them. The Federal Reserve Bank of Philadelphia estimates more than a million households owe over $5,000 in rent.

“We will see the impacts of debt owed by renters across this country for years to come,” said Deborah Thrope, deputy director at the National Housing Law Project.

“It’s going to absolutely slow the economic recovery, and we know that there are millions of people at risk of eviction prior to the pandemic, and that number has only grown,” Thrope said.

If Congress does pass more COVID legislation, she said, it needs to address the estimated tens of billions of dollars in past-due rent.