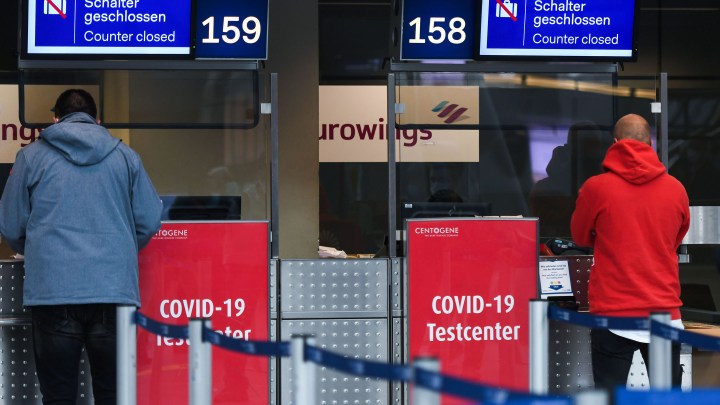 Looking to boost international travel, a global airline industry group says it’s working on a system so passengers wouldn’t have to quarantine.

David Brancaccio: Nova, when can we get this?

Nova Safo: That’s the tough part, because there are a lot of hurdles to overcome first. There’s a language barrier issue — test results have to be understandable across borders. The industry has to be able to do a lot of tests each day. They’re looking for a target price of $10 or less per test. And they need the tests to be accurate and fast.

That’s a tall order. So far, testing in air travel has been scattershot — different things being tried at different airports. But what the industry is aiming for is a common standard and the endorsement of the World Health Organization.

Initial guidelines could be proposed by the end of this month by a U.N. agency, but there’s a long road ahead, including getting tests that can match those guidelines.

Safo: They haven’t been. Globally, there are about half as many flights now as there were a year ago. And international flights are worse off than domestic, according to the International Air Transport Association.

Airlines believe the hurdles are the fear of sitting next to an infected passenger and the 14-day mandatory quarantines around the world. One industry survey found 83% of respondents would not travel if there’s a quarantine in the arriving country. So testing, perhaps, could limit quarantines and ease fears.