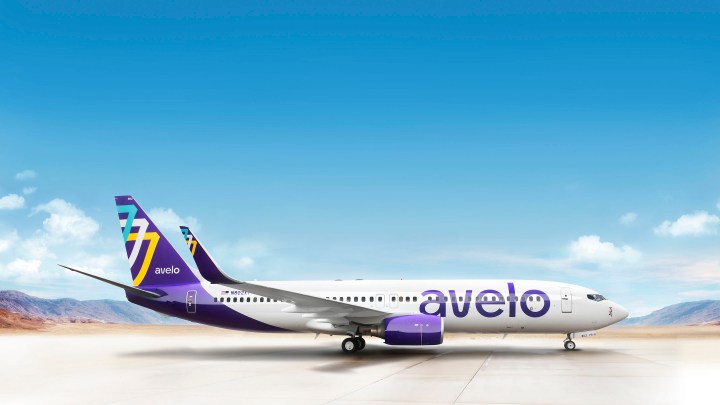 Last week the Centers for Disease Control and Prevention released updated guidance that domestic and international travel is low risk for fully vaccinated people, with certain precautions — welcome news for the airline industry, which has been hit hard by the pandemic.

And there’ll soon be a new carrier in the skies: Avelo Airlines, a budget carrier that launches today and begins service April 28.

Avelo’s founder, Chairman and CEO Andrew Levy said the airline will focus on service to smaller cities and secondary airports across the Western United States — many of which saw service reductions during the pandemic.

“Our first base of operations will be in Burbank, California, right in the middle of Los Angeles, the second-largest market in the United States,” Levy told “Marketplace Morning Report” host David Brancaccio.

Avelo will begin with 11 nonstop routes between Burbank and airports including Santa Rosa, California; Eugene, Oregon and Ogden, Utah. One-way fares — excluding add-ons like carry-on luggage and or advanced seat selection — will begin at $19 for an introductory period.

“There’s been a lot of consolidation over the last 15 years, and now the four largest airlines in the United States control 80% of the seats,” Levy said. “And, of course, consolidation did what it was expected to do, which is take fares higher. We are out there to try to bring choice back to consumers.”

David Brancaccio: Congratulations on the launch here. But really, given this cataclysm for the travel industry with pandemic, now’s the time to start a new airline?

Andrew Levy: We think this is the perfect time, actually, to start a new airline. We’re coming out of a very difficult time. We can very clearly see light at the end of the tunnel as people feel safer about getting out on airplanes and going out, traveling, reconnecting with people, and basically going back to something that is, hopefully, approaching what it used to be before the pandemic started.

Brancaccio: Among the ways that you’ll try to distinguish yourself must be, what, direct flights on routes where there’s not a lot of other airlines doing that route?

Levy: That is what we intend to do, is to serve airport pairs that are currently unserved. Our first base of operations will be in Burbank, California, right in the middle of Los Angeles, the second-largest market in the United States. And it’s a really small, nice, convenient airport instead of going through LAX, which is obviously a much larger airport. That’s a big part of what we’re doing. We’re focusing on secondary airports.

Brancaccio: And we’re certainly in a pandemic still. I suppose you can find room at gates at some of these airports a little more easily? And what about getting planes?

Levy: Well, yes, we have benefited from the fact that a number of airlines have cut back their service. Planes are amply available. And so that is definitely an advantage for us.

I should say that this is a low-fare airline. We’re actually starting out with introductory fares of $19 one-way. That fair will be available for several weeks.

Levy: $19. There are some other things that people can choose to pay for if they so value, like an advance seat assignment, checked bags — even carry-on bags will be an extra charge. But even those charges are significantly lower than what you would see elsewhere in the airline industry in the United States.

Brancaccio: You’re not going to charge to use the in-flight restroom or anything, though, right?

Levy: We are absolutely not going to charge to use the in-flight restroom.

But look, I mean, starting a new airline is always hard, even if there’s no pandemic. You need a decent amount of capital. I’m told margins are almost like a supermarket — narrow. What keeps you in this business, Mr. Levy?

Levy: There’s been a lot of consolidation over the last 15 years, and now the four largest airlines in the United States control 80% of the seats. And, of course, consolidation did what it was expected to do, which is take fares higher. We are out there to try to bring choice back to consumers and offer folks another option.