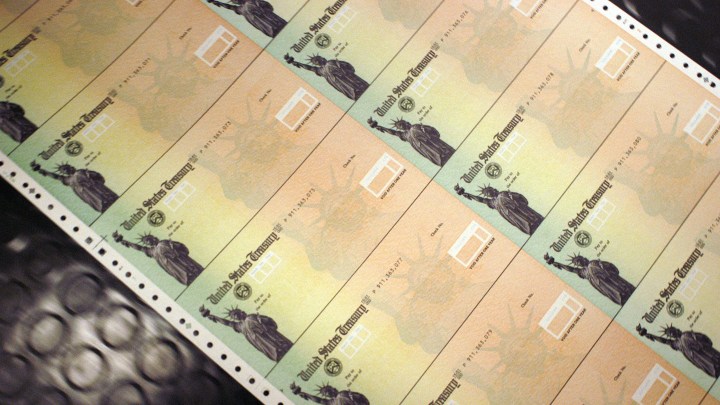 COPY
There was some initial confusion because the IRS said that it began processing payments on Friday. People were online on Monday wondering where their deposits were. William Thomas Cain/Getty Images
COVID-19

There was some initial confusion because the IRS said that it began processing payments on Friday. People were online on Monday wondering where their deposits were. William Thomas Cain/Getty Images
Listen Now

The first round of $1,400 checks are supposed to clear today for many Americans. Many, but not all.

Marketplace’s Nova Safo has some practical information about the money. The following is an edited transcript of his conversation with “Marketplace Morning Report” host David Brancaccio.

Nova Safo: This is the first wave of payments. Tens of millions of taxpayers will get them today if the IRS has their direct deposit information. The IRS says a “vast majority” of people will get their payments this way.

But it’s going to take a while to get to everyone who is eligible. Additional batches of payments go out in the coming weeks, either via direct deposit, by mailed check or debit card.

David Brancaccio: Given indications from the government, some were expecting access to the money before today. What accounts for the lost couple of days?

Safo: There was some initial confusion because the IRS said that it began processing payments on Friday. People were online on Monday wondering where their deposits were.

But big banks, notably Wells Fargo and Chase, said they were waiting for transfers — the actual cash from the government — which wouldn’t arrive until today.

Meanwhile, other institutions credited customers in advance. So, it depended on the bank.

Brancaccio: And what’s the cutoff for eligibility again?

Safo: The eligibility requirements are tighter this time around. Individual taxpayer income needs to be $75,000 or less, and that number is $150,000 or less for couples. That’s to get the full $1,400, and that’s the same as last time.

Payments shrink after that and are cut off completely at $80,000 for individuals and $160,000 for couples. That’s a bit lower than before.