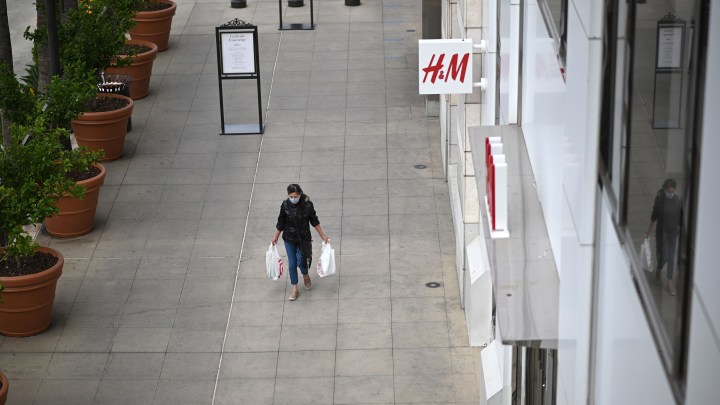 When Jonathan White, an audio engineer at a performing arts center in Dallas, was furloughed in June, he benefited from the additional unemployment money in the federal stimulus package.

And he was spending — mostly on accessories for his home office. He does some freelance work.

“I was at Best Buy probably once a week picking up something stupid here or there,” White said.

But at the end of July, the money ran out. White started spending a lot less. And he said if there’s no more stimulus from Congress, he’s going to cut back on his holiday spending this fall, too.

“I’m going to be reducing how much I spend on gifts,” he said. “I’m looking at visiting my mom in North New Jersey, seeing some friends in New York. You know, those prospects are slimmer now.”

U.S. retail spending jumped by 1.9% in September, compared to the 0.7% rise that economists were expecting.

It’s hard to say exactly why that is. It was back-to-school season, and kids grow out of their clothes quickly — pandemic or not. Also, auto sales are going up as people stop riding public transit and move to the suburbs.

“We’re seeing a bit of a spike,” she said. Regardless, “there’s no additional dollars in their wallets to maintain this spike.”

The first stimulus package propped up the economy. It gave people money to spend and allowed them to save more. But those savings have quickly been running out, according to a study out Friday from the University of Chicago and the JPMorgan Chase Institute.

“At this point, it doesn’t look like we’re going to see any kind of stimulus be deployed until after the election or possibly not until the first quarter of next year,” said Erik Lundh, a senior economist at the Conference Board.

“Until we get another package that comes in and offers some relief, I think we’re risking a double-dip recession,” he said.

And that would continue the downward spiral of less spending and more layoffs.