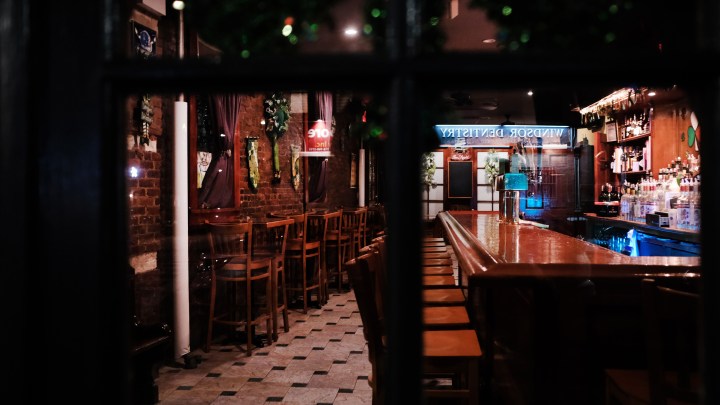 COPY
A closed bar in New York at the beginning of the pandemic. Spencer Platt/Getty Images
COVID-19

A closed bar in New York at the beginning of the pandemic. Spencer Platt/Getty Images
Listen Now

Washington’s compromise bipartisan relief bill is still in the congressional sausage maker, it would seem.

We’re hearing: more help for small business, and also big business, another round of stimulus checks (smaller than the ones in the spring), a 10-week extension of federal pandemic jobless benefits that are now set to expire right after Christmas, plus $300 a week added to everyone’s unemployment check.

Meanwhile, jobless claims are heading in the wrong direction. This morning’s report showed another 1.4 million people laid off and signing up for benefits. And other signs of economic slowdown keep coming.

So, even with the stipulation that we’ll probably get just under a trillion in relief before the end of the year, there’s still a real and increasing risk that the recovery from this pandemic recession will be slow and long and painful for many.

COVID-19 is surging, layoffs are rising, consumers are hunkering down. Not a great place to be heading into 2021.

Mark Zandi, chief economist at Moody’s Analytics, said the $900 billion Congress is considering spending to get the economy moving in the right direction is only a down payment on recovery.

And without more stimulus spending — especially to shore up state and local government budgets — Heidi Shierholz at the Economic Policy Institute said the economy is backsliding.

“We’ve already seen more than a million jobs lost in state and local government,” Shierholz said. “When you have teachers and firefighters who lose their jobs so they no longer have income, they aren’t spending money in the private sector, and so more people lose their jobs.”

Zandi’s hope is, by the middle of next year as vaccination spreads and the consumer economy starts to reopen on a post-pandemic footing, that Congress will pass a much bigger, more robust stimulus bill.

“Infrastructure spending would generate lots of jobs for all the folks who have lost their jobs permanently and … get the economy back to full employment more quickly,” Zandi said.

If that doesn’t happen — well, we’ve seen this movie before.

Shierholz says after the Great Recession, Congress pulled back on stimulus spending too much, too early.

“What they’re doing now is way better than nothing,” she said. “But it’s not enough and I do worry … we’re setting this up to be another long, slow recovery.”

That recovery to full employment took seven to eight years.