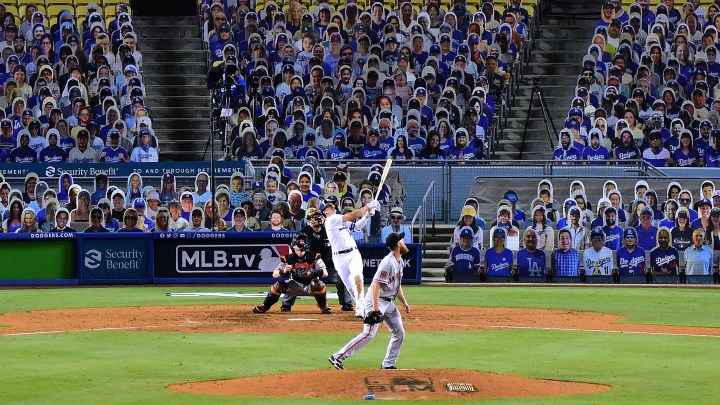 It started with European soccer matches. Then, Korean baseball. Now it’s part of all the sports on TV in the U.S. We’re talking about fake crowd noise for games that have no crowds.

And it sounded weird at first, right?

“It’s silly. They’re not fooling anybody. Everyone watching knows there’s no fans there,” said Boston sports fan Josef Blumenfeld, who still hasn’t gotten used to it.

At the same time, it would have been weird if there had been only silence in the broadcast of a recent Dallas Cowboys game. Dallas was down 15 points with five minutes left, got a touchdown, then another, then recovered an onside kick and nailed a field goal to win by one. Instead, the fake crowd went wild.

“Once they started using it, I didn’t really notice it kind of goes on in the background,” said Daniel Packer, a Yankees fan who lives in Los Angeles. “I’ve kind of learned to enjoy it a lot.”

For Packer, the faux fans cue him to pay attention when he’s not completely focused on the game.

John Ourand, media editor at the Sports Business Journal, said broadcasters are trying to make fake crowds as real as possible in order to hold your attention. The NFL, for instance, went through its archives and gathered four years of sound from every stadium.

So when Russell Wilson scrambles for a first down, there’s a Seattle crowd reaction for that.

Some Philadelphia Eagles fans know that all too well. Broadcasters piped in some hearty boos during the game after quarterback Carson Wentz threw another interception last week.