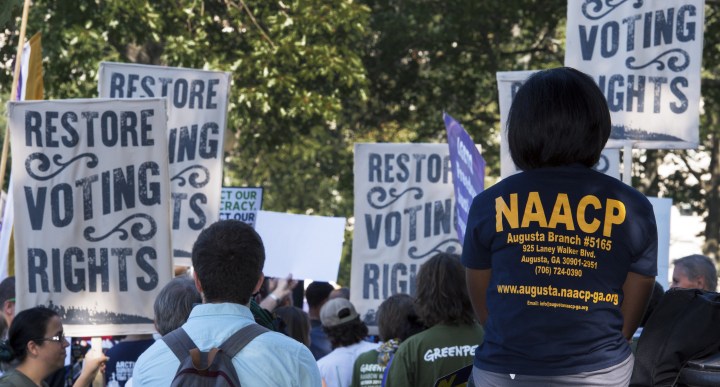 Gilda R. Daniels, associate professor at the University of Baltimore School of Law and litigation director of the Advancement Projects national office, spent more than two decades working on voting rights, including as a deputy chief in the Civil Rights Division voting section at the U.S. Department of Justice. She has investigated, negotiated and litigated cases involving the Voting Rights Act of 1965, the National Voter Registration Act and other voting statutes.

Daniels spoke to “This is Uncomfortable” host Reema Khrais about her new book, “Uncounted: The Crisis of Voter Suppression in America” and about America’s history of disenfranchising Black voters and other voters of color that continues today.  Daniels reaches back into her own family history to illustrate the devastating economic and political ramifications of voter suppression and discrimination.

The following transcript has been condensed and edited for clarity.

Reema Khrais: Thinking about why you wrote this book and why this is especially important to you. It seems like this is also pretty personal, right? Like in your book you write a lot about your family members.

Gilda Daniels: I use my almost 100-year-old grandmother as a framework for the book. She was born in 1919, which is the year before women were given the right to vote, however she voted for the first time in the 1960s. So she was in her 40s when she voted for the first time now. If she was born in 1919, she should have been allowed to vote certainly much earlier than that, at least 20 years earlier than she was, but she’s a Black woman who lived in Louisiana …. In the beginning of our country, white male property owners were given the right to vote and it didn’t matter if you were a citizen or not, which I think is interesting, right? You could, you know, as long as you are a white man and own property, you could cast a ballot.

Khrais: So that was in the 1700s. And then, the Civil War Amendments, the 13th 14th and 15th, they gave former slaves the rights of full citizenship, including the right to vote. How did these amendments strengthen Black people’s economic power?

We also saw that once those protections were removed, that we saw that people of color were no longer allowed essentially to participate in the process. Certainly, in less than 20 years, the protective measures that Congress passed to remedy the dark days and inequities of slavery through the Civil War Amendments and other means were essentially eliminated, and were rendered impotent to stop the flood of state laws that prevented enslaved, or formerly enslaved persons, from exercising the franchise right.

So the adoption of poll taxes and literacy tests and grandfather clauses certainly stopped the exercise of the right to vote amongst a formerly enslaved person. So as an example, in Alabama, in 1890, there were 140,000 Black men who were registered to vote. But in 1906, only 46 Black persons were registered to vote in the state.

Daniels: The grandfather clause essentially said that if your grandfather did not vote, essentially prior to the passage of the 15th Amendment, then you could not vote ….  And that’s exemplary of the way it happened throughout the south, and places like Georgia and Florida, Mississippi, and Louisiana as well ….

But these numbers were actually people, they’re real people. So when you hear about, you know, a literacy test in Alabama, right, you can read about Myrtle Pless Jones in my book, who was a graduate of South Carolina State University and a graduate of Michigan State University, got a grad degree from Michigan State University, an African American woman, and moved to Montgomery, Alabama, where she married and had children. And when she went to vote, with her graduate degree, was asked how many bubbles are in a bar of soap before she could register, before she could register to vote, she was asked how many bubbles in a bar of soap!

Khrais: What does that question even mean?

Daniels: It was a literacy test that was given, and it was completely arbitrary and intended to keep Black and brown people from registering to vote. Another common test was how many beans are in a jar. So whatever number you would provide would be the wrong number.

Khrais: So thinking about the Voting Rights Act, what did that mean for Black voters?

After the Voting Rights Act, you see almost parity between Black and white voters in very short order. So in places like Alabama, in like the 1980s, Black voters were registered at about 70%.

Khrais: Right, OK and then and in 20011 there was a Supreme Court case Shelby v. Holder. Can you talk about what that was and how it undermined the Voting Rights Act.

Khrais: So basically, there’s no oversight?

Daniels: There is no oversight, right.

Khrais: And so why does this matter? Why does it matter that there’s no federal oversight?

Daniels: Well, I think it matters, and I think we can use Texas as an example again, in that the day that the Shelby County decision was announced, the state of Texas said we’re going to implement this voter ID law. And it was a voter ID law that the Department of Justice and the D.C District Court essentially said was retrogressive …

…  and economically it affects people, for example voter ID laws connected to drivers licenses, primarily, those restrictive voter ID laws that say you have to have a driver’s license, a passport or a military ID. Well, folk who are economically disadvantaged, don’t have passports, they’re not spending money on passports and in places like Georgia, when Georgia first passed its voter ID in 2006, 25% of African Americans in Georgia did not own a car. Yet, the state of Georgia said “oh, you gotta have a driver’s license as a voter ID,” right. So, it’s like so 25% of African Americans don’t have a car, why would they have a driver’s license?

Daniels:  … Although African Americans have been this country 400 years, we’ve only been voting for 55!

Khrais: That’s wild when you put it like that.

Daniels: The measures that have been used to ensure that Black people don’t have the right to vote has lasted for centuries. We haven’t had a century where Black and brown voters have been free to vote.

Elections 2020Race and Economy
Tags in this Story
Share this Story