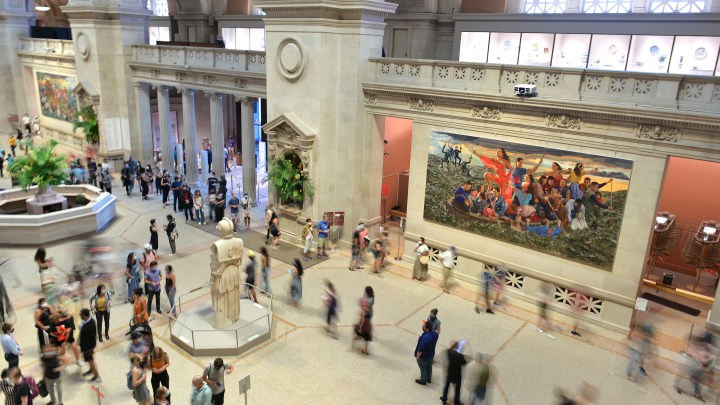 COPY
People roam around the entrance to the Metropolitan Museum of Art in New York City on Aug. 29, the day it reopened to the public after shutting in mid-March. The museum is preparing for a $100 million loss this year. Michael Loccisano/Getty Images
COVID-19

People roam around the entrance to the Metropolitan Museum of Art in New York City on Aug. 29, the day it reopened to the public after shutting in mid-March. The museum is preparing for a $100 million loss this year. Michael Loccisano/Getty Images
Listen Now

The pandemic has been nothing short of a disaster for many cultural institutions. Take art museums, for example: Many are facing severe budget shortfalls. New York’s Metropolitan Museum of Art may face a deficit of over $100 million this year. Some smaller museums may have to close permanently.

Next month, Brooklyn Museum will sell 12 pieces from its permanent collection, the first major museum in the United States to do so to pay for operating costs. Museums regularly sell art to acquire other art, but selling art for financial reasons? That’s long been a huge no-no, said David Yermack, a professor of finance at New York University.

“The rationale for that was really to just keep the curators from selling off the collection to overpay themselves to personally consume the value of the collection,” he said.

But then the pandemic happened.

That means museums will be facing budget shortfalls, said Brent Benjamin, president of the Association of Art Museum Directors.

“Anywhere from tens to hundreds of millions of dollars. So really a significant financial impact,” he said.

Art museums are in a unique position to ride out the pandemic crisis, unlike zoos or natural history museums, said Wayne State University art historian Jeffrey Abt.

“They have assets that can be translated into cash fairly quickly and fairly efficiently,” he said.

And most major art museums have a surplus of art, said Yermack of NYU. He estimated five paintings are in storage for every one on display.

“If they sold these off, not only could they improve their own financial positions, but you could really find other places for the art to be displayed,” Yermack said. “Smaller museums could build their own collections.”

And if it came to it, those smaller museums, too, could sell that art.