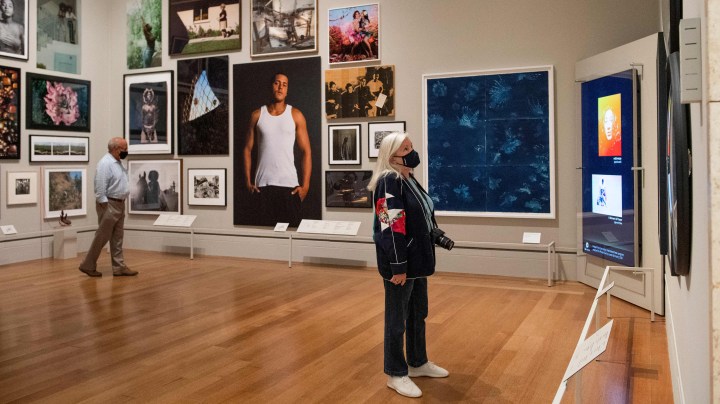 COPY
Uncertainty about the future is common among museum administrators. Above, visitors examine artwork at Los Angeles' Getty Center in May. Valerie Macon/AFP via Getty Images

Uncertainty about the future is common among museum administrators. Above, visitors examine artwork at Los Angeles' Getty Center in May. Valerie Macon/AFP via Getty Images
Listen Now

Getting people through the door has been a challenge for museums around the country since the start of the pandemic. Many pivoted to having online exhibits, but it’s been hard to monetize them.

“There were online 360-degree videos of museum spaces, virtual tours, almost anything museums could think of,” said Michelle Moon, who advises museums through her company, Saltworks Interpretive Consulting.

Moon points to “Cocktails with a Curator” from the Frick Collection in Manhattan, New York, which would provide a recipe for a cocktail (sometimes, yes, a Manhattan) to accompany a video lecture about an artwork from the collection.

The under-21 crowd is also important. Moon said school visits accounted for 40% of revenue for some museums before the pandemic. She’s worked with the Naper Settlement near Chicago to create a kind of virtual field trip for students.

“It contains really beautifully produced videos with actors in costume, portraying scenes from history, reproduced primary sources that students can examine,” she said.

“A small museum might get 30 or 40 or 50 people visiting to listen to a curator talk, all of a sudden had nearly 1,000 global visitors,” said Sheila Hoffman, who teaches art history at the University of Massachusetts.

Despite that success, monetizing their online content has been difficult.

“The models that we see already with, say, YouTube or influencers online who get clicks and advertisements — this doesn’t work well for museums, who are still baby-stepping into this arena,” Hoffman said.

Virtual school visits also don’t bring in the same amount of revenue as in-person visits, according to consultant Michelle Moon.

“It’s hard to tell whether the yellow bus field trip is coming back in the same numbers,” she said. “Instructional time has been lost over the last few years, so many school districts are under pressure to keep those kids in the classroom, learning.”

Laura Lott, who leads the American Alliance of Museums, said that museums — especially those in big cities — aren’t expecting to return to pre-pandemic attendance levels until at least 2024.

A survey by her organization finds that 17% of American institutions say they are uncertain of their future and may be at risk of closing permanently. This is a crucial time, Lott said, because when museums close, they typically don’t come back.

“What would be lost are these community centers that house the artifacts and the stories,” she said. “And those third places where people can gather that we as a society hold so dear.”