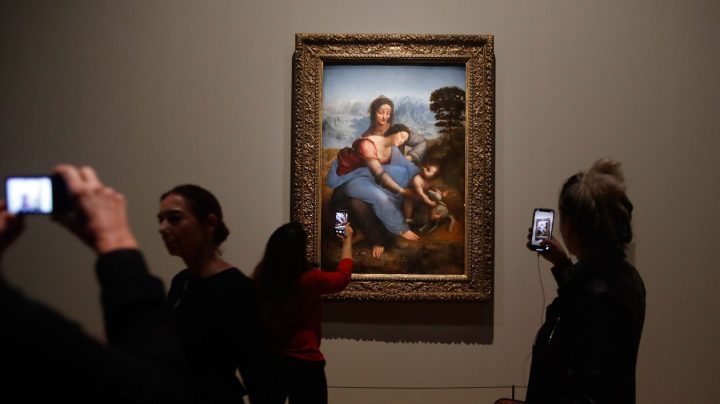 COPY
People take pictures of Leonardo da Vinci's "The Virgin and Child With Saint Anne" at the opening of the Louvre's exhibition in Paris on Oct. 22. Francois Guillot/AFP via Getty Images

People take pictures of Leonardo da Vinci's "The Virgin and Child With Saint Anne" at the opening of the Louvre's exhibition in Paris on Oct. 22. Francois Guillot/AFP via Getty Images
Listen Now

Last week, the Louvre Museum in Paris opened one of the largest exhibits of Leonardo da Vinci’s work, featuring an array of paintings, drawings and sculptures from the Renaissance artist.

But putting this show together was not easy. It took 10 years to curate and negotiations with museums around the world. Certain pieces were unobtainable, and at times deals didn’t go as planned. French President Emmanuel Macron even had to intervene in the negotiations with Italian officials.

Kelly Crow wrote about the making of the exhibit for the Wall Street Journal and spoke to “Marketplace” host Kai Ryssdal about the tough bartering and expensive insurance policies involved in borrowing major art.

“The borrower will cover any damage to the painting, what they call from ‘nail to nail,'” Crow said. “So basically from the time the painting is taken off the nail on a wall at one museum until it returns.”