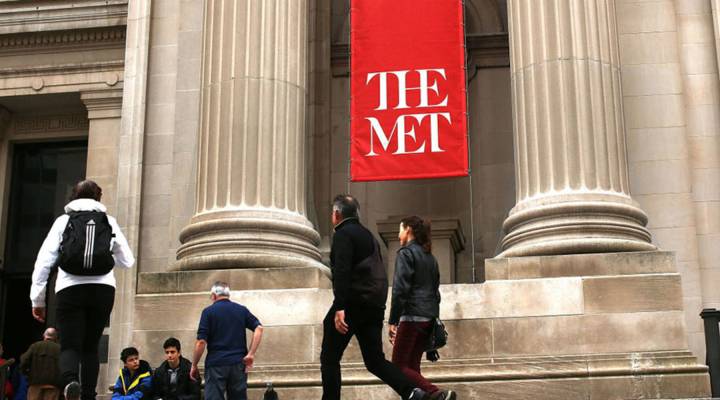 COPY
People congregate at the entrance to the Metropolitan Museum of Art (Met) on March 1, 2017 in New York City.  Spencer Platt/Getty Images

People congregate at the entrance to the Metropolitan Museum of Art (Met) on March 1, 2017 in New York City.  Spencer Platt/Getty Images
Listen Now

When Dan Weiss was in grad school, in the 1980s, he’d pay a dollar to visit the Metropolitan Museum of Art. The museum has had a “pay what you wish” policy in place since 1970. Later in life, Weiss chose to pay $5, and eventually the full suggested fee. These days, of course, Weiss gets in for free. He’s the museum’s president and CEO. “I pay with my life,” Weiss laughed.

Recently, Weiss announced that the Met will be changing the policy he enjoyed for years. The irony is not lost on him. “I didn’t know anything about the Met’s admissions policy,” Weiss said. “As I learned more about the issues associated with it, I paid more.”

Millions of Met visitors are about to learn the same lesson. Starting March 1, the museum will charge a mandatory $25 general admission for visitors who are not residents of New York state or students from neighboring New Jersey and Connecticut.

Public outcry was immediate. Much of the criticism takes the same tenor: fears that this new policy will change the character of the museum, and the type of person who visits — limiting access to low-income and diverse audience.

The thing is, says Colleen Dilenschneider of IMPACTS Research and Development — it won’t.

“The data is clear on this,” says Dilenschneider. “Museums that have free admission have similar attendance levels compared to those that charge.”

Dilenschneider pauses to choose her words. “Let’s say this,” she continued. “Museums need to do a better job letting people know that museums can be engaging and fun to more than highly-educated white people of a certain household income.”

“What’s happening to museums is a thing called the negative substitution of the historic visitor,” she explained.

In other words, the kinds of people who go to museums are shrinking, and the kinds who don’t are increasing.

“If museums want to survive, they need to do a better job attracting diverse audiences and making them into regular supporters who will pay admission,” said Dilenschneider.

She doubts that the Met’s new admissions policy will affect who comes to the museum. In fact, it may make the museum more accessible, she says.

Weiss says the admissions change is just one of a half-dozen the museum is making to improve its long-term economic outlook, from its restaurants and retail shops to its membership program and philanthropic activity. The admissions policy is a small, visible piece of that, but financially not a game-changer.

“The policy change we’re implementing is a choice,” Weiss said. “We did not have to do this. And I think it’s very important that people understand that.”

Weiss says the museum could make the decision to be free by drawing down its $3 billion endowment. But that doing so would reduce the very greatness the museum is known for. “Being a healthy institution requires the public to contribute to our well-being,” he said.

And the museum is working to attract new visitors. In the past decade, the Met’s non-white American audience grow from 21 percent to 27 percent. Dilenschneider says this is on par with the progress of other, comparable institutions. But that the change is likely attributable to increasing diversification of the overall population, not necessarily the Met’s own outreach.