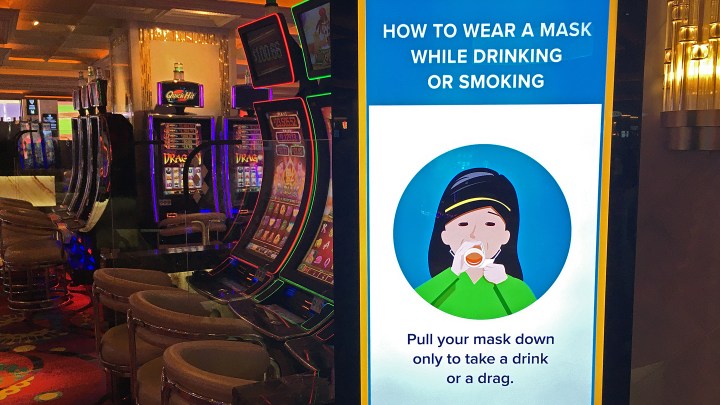 COPY
A sign at Peppermill Resort Spa Casino in Reno, Nevada, informs patrons of new protocols during the COVID-19 pandemic. Nevada has not banned smoking at casinos, unlike some tribal and state governments that have imposed bans, including New Jersey and Pennsylvania. Benjamin Payne for Marketplace
COVID-19

A sign at Peppermill Resort Spa Casino in Reno, Nevada, informs patrons of new protocols during the COVID-19 pandemic. Nevada has not banned smoking at casinos, unlike some tribal and state governments that have imposed bans, including New Jersey and Pennsylvania. Benjamin Payne for Marketplace
Listen Now

Brian Christopher says he loves playing slot machines — especially slot machines in casinos that have gone non-smoking during the pandemic. He’s making this very clear to his more than 275,000 YouTube followers.

“This casino has gone non-smoking! And we’re so proud of them. We applaud them. We thank them so much for doing that,” he said in a recent video.

The Los Angeles-based millennial influencer uploads videos of himself playing slots across the country. He also signs up for a lot of email newsletters from casinos — including casinos that still allow smoking.

“Every time you get an email, It always starts off these days with, ‘Your health is of our number one priority.’ But in my opinion, if our health really is of utmost importance to them, they should be non-smoking,” he said.

Some tribal and state governments have at least temporarily banned smoking in casinos because of the pandemic. But the country’s most popular gambling state, Nevada, has not.

While there’s been no specific research on COVID-19 and smoking, researchers have looked at how other coronaviruses in the past can be spread through second-hand smoke.

“Based on what we currently know about the properties and the size of COVID-19, it stands to reason that those particles could potentially latch onto a secondhand smoke particle,” said Dr. Melinda Mahabee-Gittens, a physician and tobacco researcher.

But gambling’s a competitive industry, so, “for some casino in Nevada to ban smoking at their own property would be economic suicide,” said Andrew Klebanow, a Las Vegas-based casino consultant.

If a single casino sets its own ban, he said, then tobacco-using patrons will just drive to another casino down the road where they are allowed to light up. But if Nevada were to impose a blanket ban, Klebanow said it would create a level playing field.

“It can’t be done on a property-by-property basis. It requires a statewide effort,” he said.

The Nevada Resort Association, a lobbying group for the state’s gambling industry, said in a written statement that ventilation systems at casinos remove smoke.

“Our members have always placed a high priority on air quality and have invested heavily in advanced technology throughout their properties that circulates fresh air and removes smoke and odors,” wrote Dawn Christensen, a spokeswoman for the Nevada resort group.

“As part of their ongoing assessment of the latest health and safety protocols, they have reviewed their HVAC systems and are enacting additional measures to maximize the exchange of fresh air and are increasing the frequency of air filter replacement and system cleaning,” she wrote.