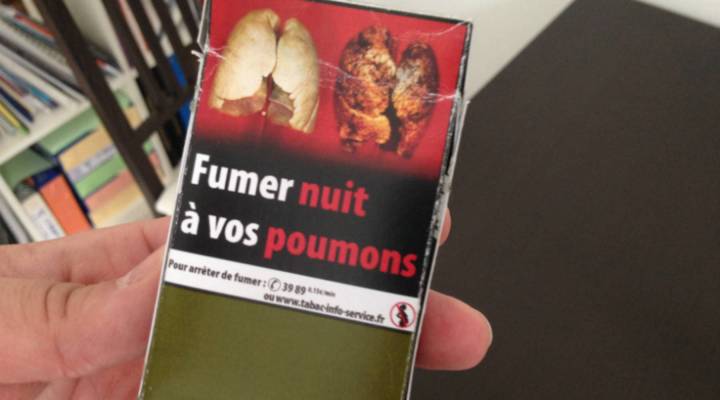 It’s practically the American stereotype of France — a Parisian sitting at a round sidewalk table out in front of a bar with a drink and, of course, a cigarette.

In this case, the Parisian is Ibrahim Kalic, a 26-year-old student, whose shiny blue box of Camels plastered with health advisories will soon become an ugly beige, along with every other carton for sale in France.

While practically synonymous in the American imagination with smoking at sidewalk cafes, France rolls out its latest effort on Friday to reduce its high smoking rates with what’s called “neutral” packaging.

While not a fan, Kalic said he does not expect the change to affect his dozen-a-day habit.

“It’s not the packet that influences people. It’s the friends smoking next to you. Once the cigarette is out of the pack, that’s what you see; you don’t see the packet,” he said.

From this point forward, manufacturers must produce only these plain cartons with even more prominent health warnings. Companies may deliver their existing stocks to retailers until November, but only the plain packaging will be allowed in stores by the end of the year.

Kalic said he’s more impacted by price. France has also been raising taxes to cut smoking rates, so cigarettes now cost on average about 6.50 euros a pack, or a little over $7.

“I feel a little, how would you say, oppressed in the sense that it’s also a right to be able to smoke. If they’d only leave us alone,” he said. “It’s more that.”

But Stephen Lequet, who led the lobbying efforts for the plain packaging law on behalf of France’s anti-smoking organizations, said Kalic is wrong about packaging having no impact.

“It puts off some nonsmokers and especially young people from starting to smoke,” Lequet said. He added that this is a particular concern for France, which has high youth smoking rates relative to other countries. About 40 percent of French 17-year-olds smoke he said, versus 32 percent of the general public.

Plain packing has already been implemented in Australia, which introduced it in 2012.

When the European Union ordered all member nations to put health warnings on cigarette cartons back in 2014, they allowed each country to make its own decision on neutral packaging. But the measure now seems poised to sweep Europe. France is acting simultaneously with the United Kingdom and Ireland. And other countries across the continent have announced plans to follow their lead, despite the objections of manufacturers and store owners.