Alan Rappeport, an economic policy reporter at The New York Times, spoke with “Marketplace Morning Report” host Sabri Ben-Achour about this. The following is an edited transcript of their conversation.

Sabri Ben-Achour: What were the stories each party tried to tell about the economy?

Alan Rappeport: Well, so the RNC last night, I mean, it was very much a story of American prosperity and putting President Trump at the center of that. It was very focused on sort of the pre-pandemic world and pre-pandemic America. And it sort of put him at the middle of that, painting him as the sole person who was capable of kind of bringing back the United States economy to those heights. The Democratic National Committee last week was very focused on this idea of “Building Back Better.” It put the pandemic front and center and, you know, put a lot of blame on President Trump for that and for the economic fallout that we’ve seen, for that, and, made the case that Vice President Biden was the one who would be able to reinvest in America’s economy, primarily by getting the pandemic under control.

Ben-Achour: On the second night of the convention, the Director of the United States National Economic Council Larry Kudlow said President Trump inherited “a stagnant economy on the front-end of recession” and said the economy was rebuilt in three years. Is that accurate?

Rappeport: There wasn’t surging growth, you know, when it was delivered to President Trump when he took over, but there were several years of strong, steady growth. And he threw some, you know, fuel into that fire with the tax cuts and the deregulation, but, I think if you look at the numbers, really, it’s continued to be on the same trajectory that we saw in the final years of the Obama administration. And, in fact, in terms of President Trump’s promises for economic growth — they talked about sustained 3% economic growth for many years — he never really actually got there. So, I think [there’s] revisionist history going on when they talk about the Obama economy that they inherited.

Ben-Achour: Meanwhile, Democrats have laid the current economic conditions at the feet of the president. Is that fair?

Rappeport: Well, it’s only fair in the sense that it’s really a judgment on the president’s handling of the pandemic. I think Democrats would say that if we took more draconian measures, and if President Trump took the pandemic more seriously earlier, then we would have gotten past the point where we are now and we would have made more progress and the economy would have made more progress. I think also, you know, there’s a lot of questions about President Trump’s handling of the economic relief measures and legislation So, I think in the sense that you have to put the handling of the pandemic on the president, the economic fallout is his responsibility as well. 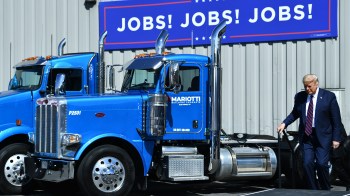