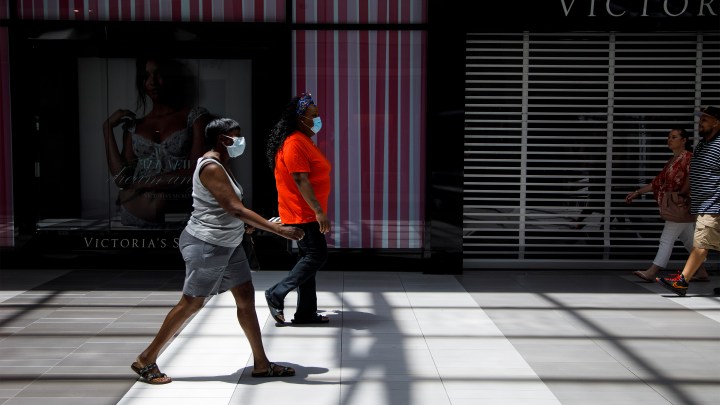 This is the latest gauge of American consumer attitudes taken by The Conference Board think tank. For August, its Consumer Confidence Index came in at 84.8 — below expectations and down from 91.7 in July. It was down quite a lot from June — 98.3 — when there was a fair amount of optimism building among consumers as the economy reopened and some folks were called back to work.

But the summer surge in COVID-19, states pausing their reopenings, schools starting virtually and gridlock in Washington over extending unemployment benefits — it’s all taking a toll on the American consumer.

Economist Lynn Franco at The Conference Board said consumers are getting more pessimistic about their economic situation.

“That cloud of uncertainty seems to be covering the majority of consumers,” Franco said. “There’s not much of an expectation that business conditions or employment are going to improve, and we’ve actually seen consumers grow a little bit more negative about their financial well-being.”

Consumers are still hesitant to return to their favorite pre-pandemic places and pastimes to spend money. Joanna Piacenza at polling firm Morning Consult said that’s largely due to the mid-summer spike in COVID-19 cases.

“Consumer comfort with doing these activities — going to the movies, going to the gym, going to a concert — that dropped down roughly one-third. And it hasn’t budged since,” Piacenza said. “It’s been about nine weeks of no movement.”

That fits the experience of 26-year-old Jessica Montoya of Portland, Oregon. She was picking up a takeout breakfast this morning near the open-air fruit stand where she works.  I asked how she feels about dining in.

“Not entirely comfortable yet,” she said. She’s done it once since local COVID-19 restrictions were lifted in June.

“You wear your mask to go sit down, but it seems like after that you’re just not wearing the mask,” Montoya said. “So in my head, it somewhat defeats the purpose.”

Morning Consult found the number of consumers who feel comfortable dining out at restaurants has fallen 10 points since May to just 31%.