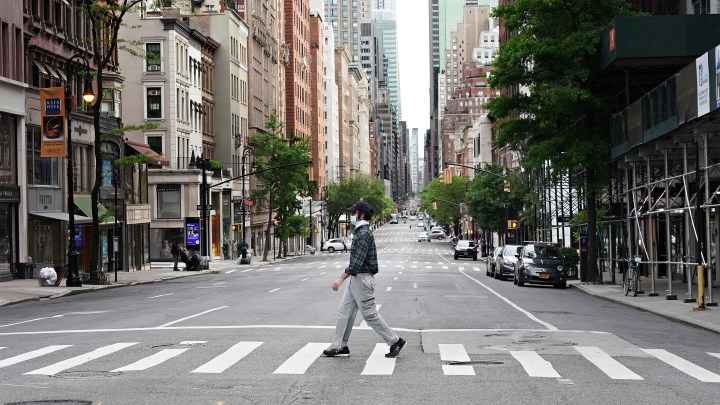 COPY
The nearly empty streets of New York City in May. City budgets, which fund local infrastructure and services, have been slammed during the pandemic. Cindy Ord/Getty Images
COVID-19

The nearly empty streets of New York City in May. City budgets, which fund local infrastructure and services, have been slammed during the pandemic. Cindy Ord/Getty Images
Listen Now

We got a new report Thursday from the National League of Cities, looking at the financial situation of American cities. Suffice to say, things aren’t great — on average, all major sources of tax revenue are down. And 90% of cities surveyed say next year’s financial situation is looking even worse.

The kind of services that cities fund are services people deal with every day.

His city relies heavily on income tax revenue, which has fallen with unemployment spiking. Cranley said the city’s had to borrow more to avoid layoffs in those services. It’s taking other measures, too.

“We’re not replacing retirees to avoid layoffs,” Cranley said. “And just over time, that diminishes the quality and the quantity of the service.”

Cities also rely on sales tax revenue, and consumers have been spending less.

Christiana McFarland, with the National League of Cities, is the report’s co-author. She said property tax revenue is likely to drop, too. But that drop-off likely won’t be felt until next year. As a result, cities are anticipating more cuts.

“Particularly when it comes to their municipal workforce, additional services, pulling back on capital and infrastructure projects,” McFarland said. “And these are all things that have broader effects on the national economy and the economic recovery.”

And when big projects are cut back or delayed, it means people won’t have services or infrastructure they need over a longer stretch of time, said Tracy Gordon, senior fellow at the Urban-Brookings Tax Policy Center.

“It makes perfect sense to not build a new bridge in the middle of a recession, like to hold back on that,” Gordon said. “But if you hold back on that year after year, then you don’t have that bridge.”

That affects a lot of people. A report last year from the University of Michigan found that 84% of the U.S. population lives in urban areas.