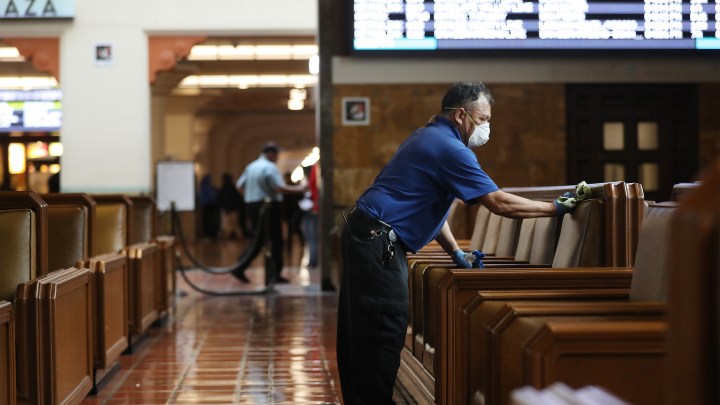 COPY
Union Station in Los Angeles. States and municipalities may turn to the bond market to support transportation systems and other facilities. Mario Tama/Getty Images
COVID-19

Union Station in Los Angeles. States and municipalities may turn to the bond market to support transportation systems and other facilities. Mario Tama/Getty Images
Listen Now

We’ve been seeing how individuals, families and businesses are feeling the economic consequences of the pandemic. Now, there’s growing alarm over the ripple effect that’s hitting local and state governments, as tax revenue craters.

Congress is debating how much support to provide and just how governments could spend any money that comes their way. And the Federal Reserve has taken the unusual step of saying it’s willing to purchase municipal bonds to help provide a backstop.

As far as state budgets go, April was supposed to be a pretty good month.

“About 15% of all income tax revenues in any single fiscal year is collected in the month of April,” said Lucy Dadayan, a senior research associate at the Urban Institute.

But 35 states plus Washington, D.C., extended income-tax deadlines to July 15, so a lot of that expected revenue isn’t coming for a while.

Richard McGahey, an economist at the New School, said that for many states, “that means they don’t know how much tax revenue they’ve got coming in till after their fiscal year starts, making it even harder for them to forecast revenues.”

Even harder because other revenue numbers, like sales taxes, are in flux as well. Tim Ryan, a municipal bond portfolio manager at investment firm Nuveen, said some states can just take the hit.

“Certain states have more rainy-day funds than others,” Ryan said. “But I think many will probably look to the bond markets to at least provide some stopgap financing.”

The municipal bond market is where towns, cities, states and transportation systems go for cash in a pinch. Usually, investors love muni bonds, and the Fed stays on the sidelines. Now, the central bank says it will spend as much as $500 billion to stabilize the market.

But not all states are jumping at the opportunity.

“We estimate it’s going to be something in the range of $300 million to $400 million,” Collins said. “That will be delayed from March, April, May and June to July.”

But he still views the Fed’s program as a last resort. For now, he thinks the losses are something the state can absorb, although he says the full picture won’t be clear until May.