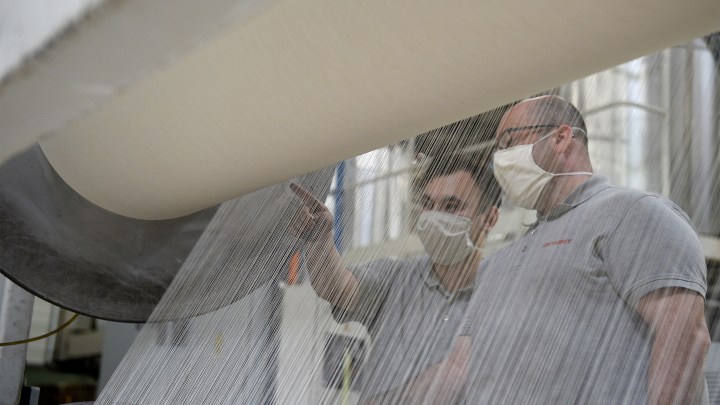 COPY
Employees at a textile and weaver factory in Eloyes, France, in June. The clothing industry has a global supply chain for fabrics, buttons and zippers. Jean-Christophe Verhaegen/AFP via Getty Images

Employees at a textile and weaver factory in Eloyes, France, in June. The clothing industry has a global supply chain for fabrics, buttons and zippers. Jean-Christophe Verhaegen/AFP via Getty Images
Listen Now

We’ve seen one retail bankruptcy after another during this pandemic: Brooks Brothers, Neiman Marcus, J. Crew, the parent companies of Men’s Wearhouse and Ann Taylor. But it’s not just those big companies that are struggling in retail. The pandemic has downstream effects all throughout the supply chain.

There are so many parts that go into one item of clothing.

Kathlin Argiro is a fashion designer in New York who makes evening dresses.

“Each one is like a little house,” she said. “You have the main fabric. And then if it’s a strapless dress, you might have an inside corset, so you need boning and lining. And you need a zipper, and you need thread.”

And you need suppliers to sell you all those things. The problem for Argiro and those suppliers?

Demand for clothing is down across the industry, which means clothing makers won’t need to buy many zippers or fabric pieces anytime in the foreseeable future.

“Everybody has been massively affected,” said David German, who runs the zipper and thread supplier AGH Trimsource in New York City and sells to Argiro. “Our biggest season would be fall and holiday. And we missed out on both of those.”

And the pain just trickles down, because AGH has suppliers, too, like the Japanese manufacturing company YKK — you probably know it from those letters on all of your zippers.

“YKK stands for Yoshida Kogyo Kabushikikaisha, but you can’t fit that on a zipper,” said Jim Reed, president of YKK Corp. of America.

Business is down between 30% and 60% from before the pandemic, Reed said, and suppliers like his are often the last to bounce back. It’s like a train, he said, “where the engine starts and then you hear the clanging down the line of all the train cars.”

There’s a train car behind YKK too: The companies that sell it raw materials like plastic and metal.