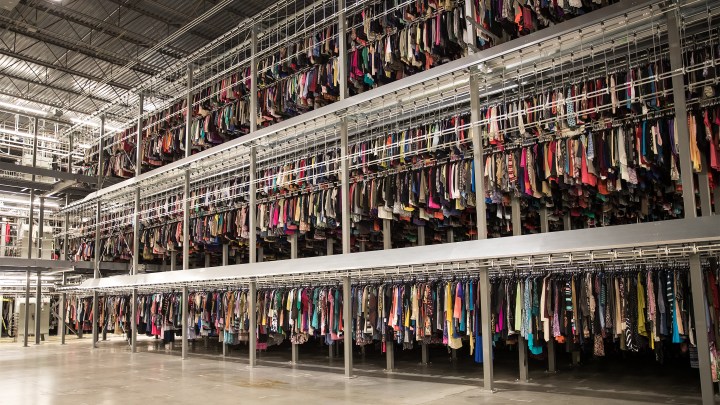 During a recession, there are always some bright spots in the economy. One of them is resale clothing. While the broader retail sector is shrinking, sales of secondhand merchandise from online resale platforms like Poshmark, Depop, and thredUP are growing.

In early March, before the lockdowns, Marketplace’s Marielle Segarra visited one of thredUP’s distribution centers in Phoenix to get a peek behind the curtain.

ThredUP is an online thrift store. It sells mass-market brands, as well as designer items, for women and children.

Here’s how it works: If you want to clean out your closet, the company will send you a postage-paid mailer that fits a hamper’s worth of clothes.

You fill it up, send it back and thredUP resells your clothes, sharing anywhere between 5% and 80% of the selling price.

The company has developed an elaborate system to track the clothes from when they arrive to when they head out the door.

It starts at the merchandising stations, where workers tear open the bags, inspect each item and decide whether to accept or reject it. They also enter data about it into a computer and assign it to a clothes hanger with a unique bar code, so it can be tracked anywhere in the warehouse.

The rejected items get recycled or sold in bulk to thrift stores.

The chosen items get carted over to the next station, where they’re placed on mannequins, positioned in front of a wall and photographed for the website.

“A typical retailer takes an item and takes one picture of it and sells 10,000 of them,” said Anthony Marino, thredUP’s president. “We have to take a picture of every single item that we sell. They’re all unique, precious little snowflakes.”

After the photos, the clothes are put back on their hangers and shuttled on a conveyer overhead into a series of racks, three stories high and several football fields wide. They hold millions of garments. In between, there are metal walkways, accessible by stairs.

Soon it’ll be time to fulfill some orders. This happens in waves, several times a day. The racks rotate, bringing a piece of clothing that someone has purchased to the end.

Workers stand on the walkway, with devices strapped to their forearms that tell them what they’re looking for — say, a pair of denim shorts from Banana Republic, size 8 — and which rack it’s on.

Then the worker hangs the item on a conveyer that will carry it to the other side of the warehouse, where it gets rolled up in tissue paper, packaged and shipped.

Since I visited thredUP, the whole world has changed. The company decided to keep its distribution centers open through the pandemic. It offered furloughs, with benefits, to employees who weren’t comfortable working, but it’s ended those now. It says most workers have come back.

Some major retailers boosted pay during the pandemic. At thredUP, wages have stayed the same.

At the distribution centers, employees’ temperatures are taken before every shift. They wear masks. There are markers on the floor, so everyone stays 6 feet apart. Everything’s moving a little slower.

Except that since the pandemic took hold, people are sending thredUP more bags of clothing — 60% more.

“There are a lot of people who are home, they’re looking for space in their house. They are seeing more than ever that they have clothing that they don’t need or don’t wear, and they’re sending it to us,” Marino said.

Also, from mid-March to the end of May, as retail sales plummeted, thredUP’s sales jumped by 20%. Maybe because a lot of brick-and-mortar thrift stores are closed — or because during a recession, people look for bargains.