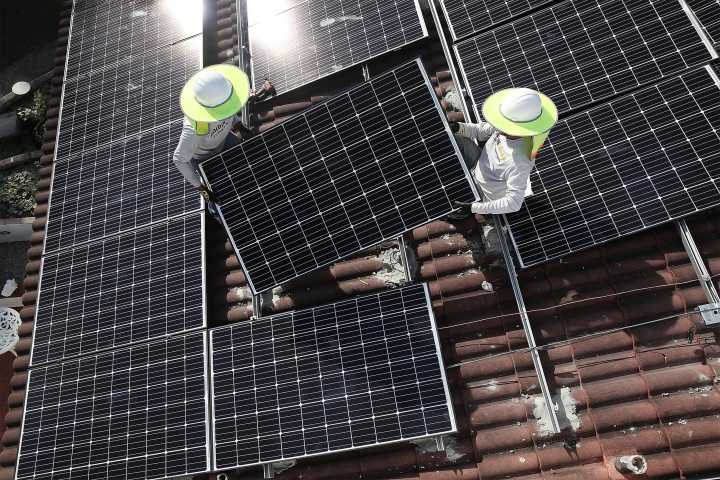 There’s this notion that slowing climate change is an economically costly task. To wean ourselves off of fossil fuels means massive job losses for the traditional energy industries like coal, oil and natural gas — something that seems untenable in the midst of a historic unemployment crisis.

That notion is false, according to Saul Griffith, a MacArthur “Genius Grant” winner and CEO of the research group Otherlab.

He’s co-author of a new report with the nonprofit Rewiring America that finds that completely decarbonizing the U.S. economy would create many more jobs than would be lost — as many as 25 million more jobs in the near-term, as we overhaul our infrastructure, and then 5 million more energy jobs than we have today in perpetuity.

Griffith says this massive job creation makes decarbonization the right answer to two of the pressing problems we’re facing: a looming climate catastrophe and an economy on the brink of collapse, in dire need of jobs. And he says that if we get moving, we could accomplish it all in the next 15 years — a timeline that is necessary if we want to limit the global temperature rise to between 1.5 degrees and 2 degrees Celsius.

It would take a lot of effort, but no more than the mobilization the country saw during World War II.

“By the accounting, it might even be a slightly smaller project than winning World War II, with a much happier outcome,” Griffith told “Marketplace Morning Report” host David Brancaccio.

“If we are serious about what we should be doing for the planet, this is the level of effort required to do it. And if we contextualize it in terms of COVID-19, this is a historic opportunity — like the Great Depression; like World War II — to do the massive infrastructure spending required to do a job like that.”

How would it work? Griffith says we don’t have to wait for some miracle invention or impose harsh efficiency requirements. The answer is to “electrify everything” — to transition our oil, coal and natural gas consumption into electricity consumption, and then to clean up our electricity sources.

According to his analysis, if we electrify the majority of the economy, we’ll only need 50% of the energy we think we do.

“And that’s without doing any of the things we traditionally think of as efficiency. So that means we keep our cars the same, we just electrify them. We keep our homes the same size and we just electrify the heat with heat pumps,” he said. “And so we could solve climate change. It’s a little bit easier than we think, because we need less energy than we need today to do it. And it involves a lot less sacrifice.”

The following is an edited transcript of the conversation between Griffith and Brancaccio.

David Brancaccio: You folks say it this report: doing this no-more-fossil-fuel-at-all would be like what the U.S. did to mobilize the economy to fight the Second World War. I mean, this would be huge.

Saul Griffith: It would be huge. To win World War II, America spent about 1.9 1940 gross domestic products. And then if you do back of the envelope calculations of how much it would cost to decarbonize America, it’s probably between 1 and 1.5 GDPs. So, by the accounting, it might even be a slightly smaller project than winning World War II, with a much happier outcome. And so if we are serious about what we should be doing for the planet, this is the level of effort required to do it.

And if we contextualize it in terms of COVID-19, this is a historic opportunity — like the Great Depression; like World War II — to do the massive infrastructure spending required to do a job like that. And it will create the jobs we need. And ultimately we will have a stronger, more resilient, better-prepared nation in the future, with a healthier populace, if we do it.

Brancaccio: And you’re not talking about doing this by stardate 5123.5. This is, what, in about a 15-year crash program?

Griffith: If we take the science seriously, and we really want to keep ourselves below two degrees, America probably needs to do the majority of its decarbonizing by 2035, assuming that it will lead and other countries will follow.

Brancaccio: When I think of the austerity needed to lower the chances of climate catastrophe, I think of sacrifice but you go around saying the process would be joyous?

Griffith: I think your first proposition is really not quite correct. You can’t efficiency your way to zero. We still have this historic dialogue about efficiency when what we really need to do is have a dialogue about transformation. And if you sit down, as we have done, we actually did a project with the Department of Energy looking at all of our energy data, and you think about what happens when we electrify the majority of the economy, turns out we only need 50% of the energy we think we need. And that’s without doing any of the things we traditionally think of as efficiency. So that means we keep our cars the same, we just electrify them; we keep our homes the same size and we just electrify the heat with heat pumps. So I actually think there’s a great headline, which is we don’t have to have austerity to solve climate change — not in North America, at least, because it has fabulous renewable resources.

And so we could solve climate change. It’s a little bit easier than we think, because we need less energy than we need today to do it, and it involves a lot less sacrifice. And in fact, most of the things we have to gain are things that we all want to gain: we want cleaner air, we want cleaner water, our health will improve. Most households have carbon monoxide and carbon dioxide pollution from burning natural gas inside the home; that will go away. So nearly everything we have to win and gain — I don’t think there’s a lot of austerity absolutely necessary.

Brancaccio: And you get net jobs out of this? Because you’re going to lose some.

Griffith: Yeah, so if you really do it as aggressively, as we need to to hit the appropriate climate targets, we’d probably create as many as 25 million new jobs in the near term. And in the long term, we’ll have 5 million or a few more jobs than we do today in the energy industries that support the economy.

Brancaccio: This better decarbonized future is a little bit more labor intensive. And if you’re worried about creating jobs, that is a benefit as you see it.

Griffith: So the current energy industry is really quite astoundingly effective in terms of how much energy it creates for how few jobs. When you’re buying oil or natural gas or coal there’s a material cost to those things, and then there’s the labor cost of digging them up and processing them. If we go to renewables, the fuel is actually free. We don’t pay for the wind or the sunshine as you do in extracting the coal and natural gas. And all of the machines required for that require a little bit more labor because we have to install them and maintain them and they’re more labor intensive, so far, then fossil fuels. So we can still have cheaper energy because we don’t have to pay for the raw materials.

Brancaccio: On that last point, we should spare a thought for the existing jobs in the fossil fuel industry that would be lost.

Griffith: Absolutely. And I think we should be very sympathetic — you know, I think we have an aggressive conversation to the fossil fuel workers where we should be thanking them for a century of service and cheap and convenient energy. But remember, their jobs won’t all go away tomorrow. They’ll go away slowly over the course of a generation, and they’ll be replaced by more jobs that pay just as well or better, also in energy. And many of the jobs will be similar: skilled trades jobs, jobs driving trucks, doing installation and maintenance, jobs that people can be proud of building infrastructure.

Brancaccio: The electricity that you’d need to power this remarkable conversion to electricity is renewables: wind, solar, hydro — and you’d use some hydrogen power, which takes electricity to do?

Griffith: I’m not a strictly renewables guy, although we could do it all with renewables. It would be a little bit easier if we could have a small amount of nuclear in the mix, and so we should absolutely keep that on the table. America has a lot of biofuels that we could use to power the difficult-to-decarbonize sectors like aviation and ocean transport. A little bit of hydrogen will be necessary to decarbonize things like the steel industry. But the very large majority of things will be able to be done with electricity.

Brancaccio: I saw in the report that you do have some expanded nuclear power in there for a while. That will annoy some environmentalists, given that we don’t know what to do with the waste, and that nuclear power station sometimes go awry, as we know.

Griffith: I’m agnostic. Honestly, that is something that the market should decide. It’s unclear whether nuclear will be able to compete on costs with solar and wind. And, in fact, if you were betting today, you would bet against nuclear being able to compete on cost. So I think it will actually be decided by public opinion and by cost. And the good news is that America can solve climate change without nuclear. But the reason you can say that it would be a little bit easier is nuclear is a very consistent power source. And so having a little bit of nuclear certainly helps with the winter minimum, where the sun doesn’t shine as much in winter. And the fact that the sun doesn’t shine overnight, and the intermittency of wind. All of those things are helped a little bit if you have very reliable, always-on sources like nuclear and hydro.