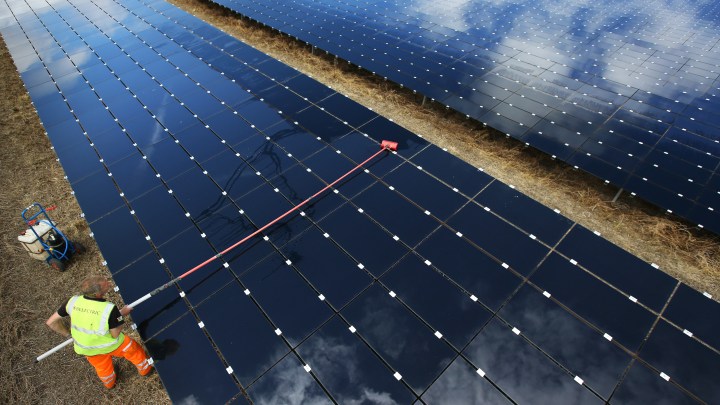 COPY
"A solar job being created in California does not replace a coal economy job in eastern Kentucky," said one expert. Peter Macdiarmid/Getty Images

"A solar job being created in California does not replace a coal economy job in eastern Kentucky," said one expert. Peter Macdiarmid/Getty Images
Listen Now

Tackling climate change will create a lot of economic opportunity and a lot of jobs. That’s been one of President Biden’s central messages at the two-day virtual Climate Summit hosted by the White House this week –– and throughout the first few months of his presidency.

“Within our climate response lies an extraordinary engine of job creation and economic opportunity ready to be fired up,” Biden said in remarks this week. “That’s why I’ve proposed a huge investment in American infrastructure and American innovation to tap the economic opportunity that climate change presents our workers and our communities.”.

If the government does what Biden is proposing, and spends billions –– or trillions –– of dollars on clean energy, infrastructure and other initiatives to address climate change, it will be “a major new engine of job opportunities,” said Robert Pollin, co-director of the Political Economy Research Institute at the University of Massachusetts Amherst. “Across all sectors of the economy.”

But many of the new jobs being created in clean energy, in particular, are not being created in the same places where oil, coal and natural gas jobs are being lost, said Jason Walsh, executive director of the BlueGreen Alliance, a coalition of labor unions and environmental organizations.

“A solar job being created in California does not replace a coal economy job in eastern Kentucky,” Walsh said. “So we have to be very intentional and targeted about pushing investment into the communities that have been on the hurting end of this energy transition.“

“It includes 100% pension guarantees, it includes reemployment guarantees –– not just job training, not just relocation, not just empty promises, a guaranteed job, and the job has to pay the level that the current job pays, at least for a few years,” Pollin said.

In East Kentucky, coal mining jobs are often the highest paying jobs, especially for people with a high school education. But they’ve also been dwindling for years.

“We had a mono-economy here for more than 100 years, and resource extraction economies drain a place,” said Peter Hille of the Mountain Association, a nonprofit focused on community development in the state.

“If we task ourselves to say, ‘Well, how can we replace that $80,000-a-year job for somebody that still has only the same amount of education?’ That’s a mighty steep lift. But I think it’s also the wrong question. The question is: How do we create a more diverse economy so that when anybody loses a job, they’ve got multiple options?”