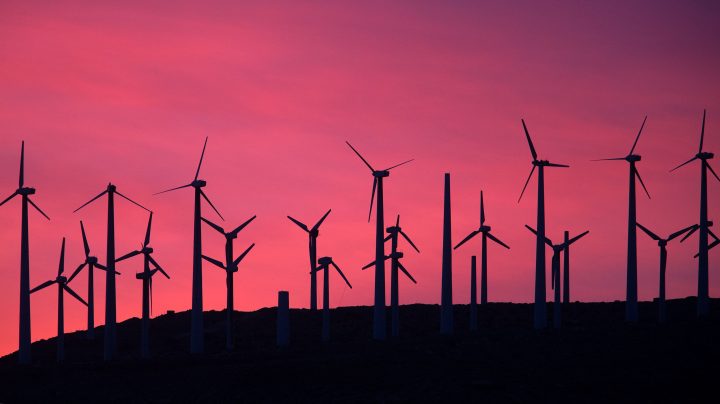 COPY
"We have seen this scenario time and time again, where oil is proving to be an unstable factor in our economy," said Mark Brownstein at the Environmental Defense Fund. "And now we have the opportunity to move to a different future." David McNew/Getty Images
A Warmer World

"We have seen this scenario time and time again, where oil is proving to be an unstable factor in our economy," said Mark Brownstein at the Environmental Defense Fund. "And now we have the opportunity to move to a different future." David McNew/Getty Images
Listen Now

As a result of Russia’s invasion of Ukraine, both the United States and Europe are looking to end their dependence on Russian oil and gas. In response to rising gas prices, the Biden administration has released oil from the strategic reserve and resumed the leasing of federal lands to drill for oil and gas. Be that as it may, many scientists and environmental advocates believe that the current energy crisis can act as a catalyst for the United States’ transition from fossil fuels to cleaner sources of energy.

According to the latest report from the Intergovernmental Panel on Climate Change, the world would need an almost immediate switch from fossil fuels to renewable energy to avoid the worst effects of the climate crisis. The Biden administration has allocated around $550 billion toward clean energy and climate resilience through the Build Back Better bill, the largest investment in clean energy in U.S. history. The measure passed the House but died at the Senate.

Mark Brownstein, the senior vice president of energy at the Environmental Defense Fund, believes that the solution to both the energy and climate crises is to make “the fastest possible transformation of our global energy system.”

“Marketplace” host Kai Ryssdal spoke with Brownstein about the war in Ukraine’s impact on the energy sector. The following is an edited transcript of their conversation.

Mark Brownstein: Look, there’s no question that people see the high price of gasoline and that, for many, this is a real economic challenge. And so it’s understandable that policymakers will look for ways to reduce those prices in the short term. But the fundamental fact, Kai, is that we have seen this scenario time and time again, where oil is proving to be an unstable factor in our economy. And now we have the opportunity to move to a different future.

Kai Ryssdal: Yeah, but it’s a question of political will, right? And you don’t have to look too much farther than the President of the United States releasing oil from the strategic petroleum reserve and asking oil producing countries, including, reports are, Saudi Arabia and Venezuela, to pump more oil as a way to address his political problems that this crisis now is presenting him.

Brownstein: Well, as I said, Kai, you know, there’s no question that the high price of gasoline affects Americans and some Americans very much. But, you know, the very same day that the President announced release from the petroleum reserve, he also issued an executive order that will make it fundamentally easier to produce batteries in the United States, batteries that will be used in cars and trucks that will allow us to get off of oil. And so I don’t think the president is getting enough credit for the steps that he’s been taking to take this moment and fundamentally move our country in a different direction.

Ryssdal: Point taken, and I don’t want this to devolve into a political conversation about Joe Biden’s woes — although on the energy front, they are many. But this is now a question that is, in some degree, beyond his control, and you don’t have to look too much farther than the jam that the Build Back Better program and his climate-friendly policies there are in, right? It’s all but dead.

Brownstein: Well, it’s beyond any one person’s control, in this sense. The fact of the matter is that the United States does not have the ability to set the global oil price. And the only way to, you know, fundamentally make a change is to decouple our economy from dependence on oil and the global market that sets it. There’s currently $550 billion of clean energy investments before the Congress. And I believe that the Ukrainian situation is now causing some who perhaps before dismissed this as simply an environmental issue, to now come back and take a look at this $550 billion as a strategy to help us move away from oil dependence and the geopolitical risks that it creates for our economy.

Brownstein: Economic decarbonization means accelerating the production of zero-carbon electricity, using that zero-carbon electricity to displace natural gas in our homes and businesses, and then, for industrial processes where electricity isn’t quite ready for prime time, how do you use green hydrogen and other advanced, what they call “e-fuels,” to make up the difference. The United Nations talks about the fact that we have about 30 years to make progress — considerable progress — if we’re going to avoid the worst consequences of climate change. And the reason why that’s so important is because if we fail to deal with the climate crisis, we’ll lose somewhere between 11% to 14% of global economic output by 2050. So the costs are real, both for the economy and for livability on the planet, if we don’t make progress.