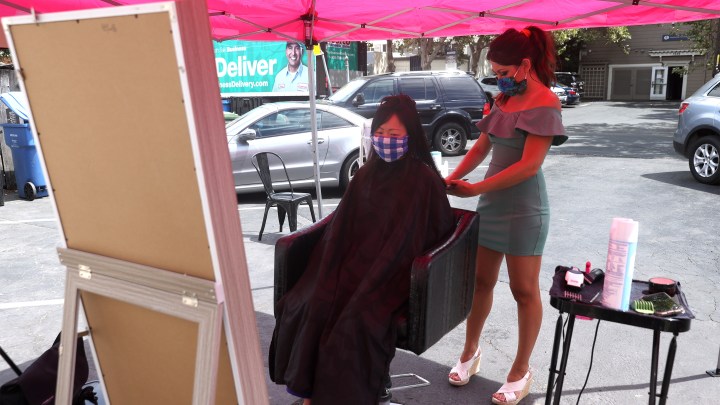 Research into COVID-19 and how it spreads is ongoing, sometimes in a deliberate fashion and sometimes just as a consequence of people trying to live their lives and run their businesses in a pandemic. Scientists say certain trends are becoming clear, and can help inform decision making about which activities should be allowed, and which should be restricted.

As states try to reopen, and see cases surge, some are rolling back those permissions. For example in California, restaurants and hairdressers have been on a roller coaster of openings and closings, and are now only allowed to operate outdoors. Is that safer? We asked some epidemiologists how to judge.

How do you weigh the risks?

“Something I’ve been doing is really thinking about risk on a spectrum,” said Nadia Abuelezam, epidemiologist at Boston College. She says weigh each activity you’re considering, giving it a mental score from high risk to low risk. The aim is to reduce any possible exposure to the coronavirus, so consider how long you’ll be in contact with other people, whether that will be in an enclosed space, and whether you’ll be able to wear a mask consistently.

Also consider whether cases are currently rising where you live. Then, make a judgement if the risk is worth it for what you’re hoping to achieve. A doctor’s appointment may be worth some risk to you, but a meal out, less so. “Just because you can do something, doesn’t mean you should,” said Anne Rimoin, epidemiologist at UCLA.

“I think that if we’re concerned about the economy, and getting kids back to school, everyone should be doing their part, staying home as much as possible, and only going out when absolutely necessary,” she said.

Does being outdoors mean lower risk?

The thinking is that outdoors, particularly in an area well ventilated by a fresh breeze, means there’s less change of the virus being transmitted from person-to-person.

States and cities are allowing some otherwise closed businesses to continue operations outdoors. In New York and Boston, restaurants are taking over parking lots and sidewalks. In California, hair salons and barbershops can offer cuts outside, under a tent or canopy, as long as three sides are open.

“I would put outdoor activities on the lower risk end of the spectrum,” said Abuelezam.

How do scientists work out what’s safer?

The science of how the coronavirus spreads, and in particular the role that people without obvious symptoms play, is still evolving. Researchers are working to build their knowledge. Professor Rimoin at UCLA is studying health care workers to understand how they become infected, as well as whether they get lasting immunity to the virus when they recover.

Contact tracing, particularly in other countries, is an invaluable source of information about viral spread. Tracers are able to retrace the moment that infection is thought to have occurred, and then highlight the risk factors. In January an infected diner ate out at a restaurant in Guangzhou, China. Nine other diners got sick, but 73 didn’t. Researchers worked out exactly where they were sitting, and concluded a side draft from the air conditioning was responsible for the spread.

What about wearing masks?

Other information comes from observing the giant, real-world, experiment that everyone is currently living. In May, two hair stylists in Springfield, Missouri, with COVID-19 symptoms continued working with clients. According to the CDC, they and their clients wore masks, and none of the 139 people who sat in their chairs developed COVID-19.

That’s one isolated situation but the information helps build a picture. “That’s really hopeful that masks really do help prevent spread,” said Abuelezam. It’s something that more and more states are requiring, with Ohio, Indiana, and Minnesota making more than 30 states with some sort of mask guidelines.

“The cautions are it may be hard to generalise to other situations,” said Abuelezam.

Some researchers are taking things further, to calculate the risk in broader situations. German scientists are bringing 4000 people together in a stadium in Leipzig to watch a pop concert, while they study them to figure out how a hypothetical virus spread would happen. The concertgoers will wear devices transmitting their location in the stadium, and use fluorescent hand sanitizer so researchers can later see which surfaces are touched repeatedly. Participants must test negative for the coronavirus 48 hours beforehand.  The idea is to figure out how to hold large events safely.

What about socializing in “pods”?

Some families are considering socializing in pods, or bubbles, as a way to widen their social contacts but still keep things manageable. They form agreements with other households to mix with them, but only them.

“I’ve seen it done on a small scale,” said Abuelezam. “The tricky part is when you’re thinking about expanding.”

The number of potential contacts, and therefore paths for infections, grows rapidly as the size of pods grows. There’s a high degree of trust and accountability that is required.

Abuelezam sees that it’s a possible model for school reopening though. An entire elementary school would become a social bubble, with the kids mixing daily. Parents would have to trust each other, and hold each other accountable to report any symptoms, and to self isolate with their kids if they have been in a risky environment.

Short of daily tests, quarantines are one of the best proven ways of preventing disease spread. Many states, including Connecticut, New York, and New Jersey, say that anyone entering the state from a high risk area has to isolate themselves for 14 days.

“Fourteen days is the scientifically determined number, for the time from exposure to first symptoms,” said Abuelezam.

Symptoms can appear anytime from two to 14 days after exposure, but for most people they will start feeling sick after 5 days. There are some suggestions that a shorter quarantine would be as effective, and less disruptive. Australia is reportedly considering a one week quarantine for some international visitors.

Quarantines are also an essential measure for anyone who starts to show symptoms, even if they are not traveling. By staying home, they can limit the spread. The CDC says new data shows people are not infectious 10 days after their symptoms started, so after that time they’re clear to leave the house and return to work.

However recently attention has been focused on asymptomatic carriers, people who can be infected with, and spread, COVID-19, but never know it because they don’t get sick.

That just highlights the need for everyone to take basic precautions, according to epidemiologists. “The things we should be focussing on are the tools we have: wearing masks and social distancing,” said Rimoin. “We know they work.”