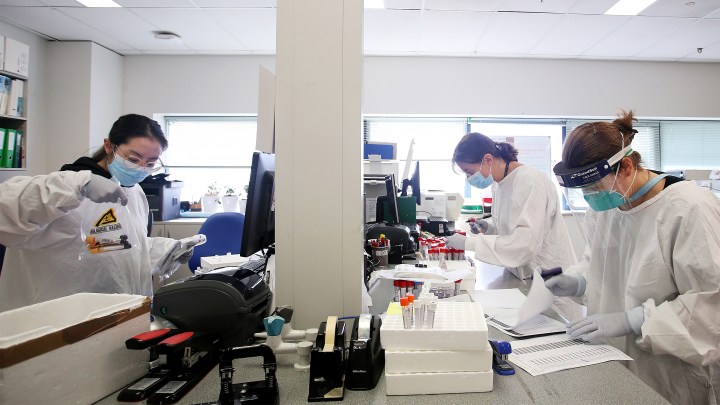 In the early days of the pandemic, some scientists turned their attention to researching the novel coronavirus and the disease it causes. But most other scientists had to stop research in their labs. We talked with a few of those scientists a couple of months ago about what it was like to pause their lab work — and what it would take to get it going again.

When we last heard from Isabella Rauch, she was preparing to reopen her immunology lab at Oregon Health & Science University in Portland. A couple of months earlier, she had shut it down, tossing out cell samples and euthanizing mice. Now, her lab is open again — but she can only fit 50% as many scientists into it.

The new normal? Masks. Video calls. And extensive cleaning of equipment, such as a microscope that costs more than $100,000.

“You can’t, you know, just spray Lysol over the thing, but we have these very special cleaning agents for each part of the microscope,” Rauch said.

And that takes 15 minutes before and after anybody uses it.

“Some of the mice decided they’re just not interested right now,” Rauch said.

At Washington State University’s medical school, labs are also open again in limited capacity. Vice Dean for Research John Roll said the amount of research has been diminished not just by social distancing, but because “researchers are buying [personal protective equipment] with their research funds.”

That’s money that would otherwise have gone toward other things.

Research has also restarted for Dr. Kevin Sheth. He’s a neurologist at Yale who does clinical trials on traumatic brain disorders. One of his studies involves 120 research sites across the country. About half of those are up and running again. But they look different from before.

And all of that costs money. So the question is, what happens when the original research grant runs out?