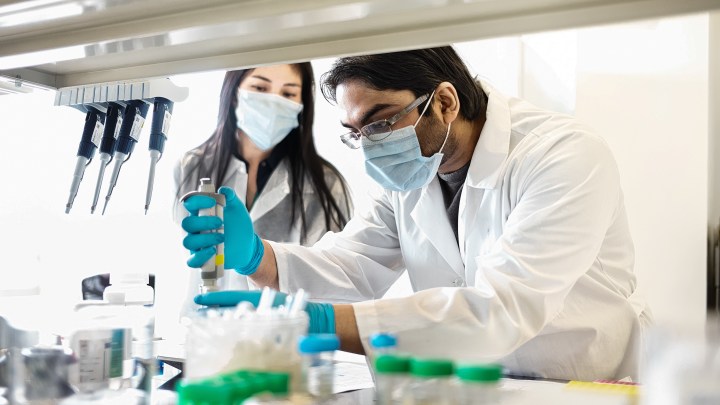 COPY
While coronavirus research has boomed, many other kinds of projects have been hindered. Misha Friedman/Getty Images
COVID-19

While coronavirus research has boomed, many other kinds of projects have been hindered. Misha Friedman/Getty Images
Listen Now

Over the past year, while some scientists turned their attention to COVID-19 and creating vaccines to fight it, most others had to pause their research — and re-imagine how to do it. Isabella Rauch, an immunologist at Oregon Health & Science University in Portland, has mostly worked from home. Now, she occasionally works in her lab.

But the lab where Rauch studies how pathogens enter the body through the intestines looks different these days. All the machinery — incubators, freezers, scanners — used by multiple people were located in one common space before the pandemic began.

“But we really tried to make it possible for people to access these machines now during their work without having to cross someone else’s path or come close to someone else that’s doing their work,” Rauch said.

It’s taken a while to get things up and running. She had to organize social-distance scheduling for researchers, breed new mice for experiments, thaw out frozen cells and then figure out how to virtually share images of those cells under a microscope.

Her lab now operates at 70% capacity. And because of all the restrictions, the spontaneity that can cultivate scientific insight is lost.

“It’s less fun, I have to say. Like, for me the big part of the science is discussing the science with other people, getting excited about projects,” Rauch said.

And it may be harder to do that next project. Rauch’s lab is a young one. So every experiment, all of her research, counts in terms of getting funding for future projects. But her work has been interrupted, scaled back and delayed.

“It’s definitely going to hurt us applying for bigger grants in comparison to more established labs,” she said.

Finances are also a concern for John Roll. He’s dean of research at Washington State University’s medical school. He’s been spending a lot of time strategizing how to keep the research going and how to fund it with all the other financial challenges facing higher education.

One possibility? Reaching out to the private sector to underwrite research.

“Those types of public-private partnerships may become a little more common and actually a very pragmatic way for university-based researchers and industry to serve mutual benefits,” Roll said.

Funding is also the big question for Dr. Kevin Sheth. He’s a neurologist at Yale who does clinical trials on traumatic brain disorders. One of his studies involves 120 research sites across the country. Over the summer, about half of the sites were up and running, with modifications such as electronic consent, virtual follow-up and remote assessments. But the surge in COVID-19 cases in the fall took a toll.

“Many of the physicians who are investigators and researchers simply don’t have the time and the bandwidth and the staff to conduct clinical trial activities in high-quality and safe ways because they’re pulled for emergency clinical care,” Sheth said.

So his project is behind schedule — Sheth expected his research to take three to five years, and now it’s looking more like five to eight. But there isn’t any more funding. When asked if the delays will make the science suffer, he responded: “Yes it suffers. I mean absolutely.”

But Sheth is an optimist. Trying to do non-COVID-19 science during the pandemic, he said, “does push us to figure out how to become more efficient, how to become more cost-effective and how to ask and answer new scientific questions that we wouldn’t have otherwise been compelled to, even in our existing projects.”