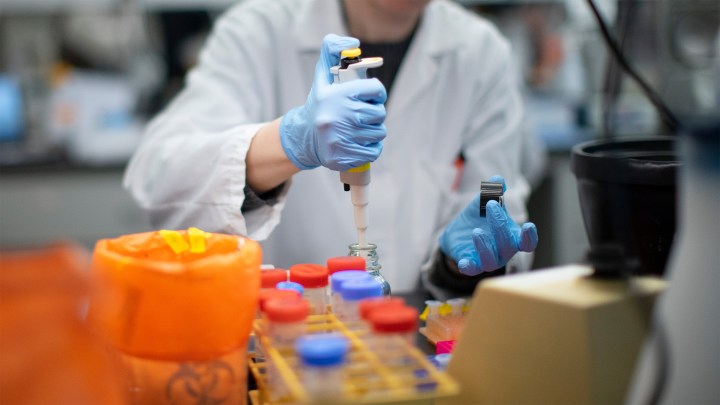 COPY
A researcher at work in a COVID-19 testing lab. The process requires the contributions of countless professionals behind the scenes. Kena Betancur/Getty Images
COVID-19

A researcher at work in a COVID-19 testing lab. The process requires the contributions of countless professionals behind the scenes. Kena Betancur/Getty Images
Listen Now

Such are the everyday challenges for Dr. Alex Greninger, pathology lab scientist and assistant director of the clinical virology labs at the University of Washington Medical Center. Greninger allowed us to check in with him — by Zoom, of course — four times in the course of a recent workday.

“We’re gonna follow those tracking numbers, because if they get shipped today….”

At the beginning of the day — actually, by the time I call, Greninger’s been at work for 1.5 hours — he’s checking on the COVID-19 testing machines his office has purchased to get an idea of when they’ll arrive. This is one of the hats he wears: that of a shipping clerk.

Thing is, when and whether the new machines actually arrive is in question. This equipment is in short supply, with labs around the world chasing the same limited inventory. One model this lab bought is the Roche 8800, a long, white machine that resembles a row of kitchen appliances perched atop cabinets. Cost: $750,000, Greninger said.

It’s on back order.

“We’re told that they couldn’t ship them until quarter two of 2021. Yeah, pretty crazy.”

“We don’t even know if we’ll ever receive it,” Greninger says. “Right now, I think the receipt date has been pushed back into December. We actually looked to get more Roche MP 96s [a different model], and we’re told that they couldn’t ship them until quarter two of 2021. Yeah, pretty crazy.”

Testing equipment shortages are a big reason this lab has to say no to medical offices that want to send human testing samples to Seattle, from faraway places including Florida, Louisiana and Connecticut.

“We’re always turning away samples,” he says. “The last three weeks, you know, we’re probably turning away more samples than we actually run.”

It’s important to provide test results — positive or negative — within 48 hours, which this lab does. At times last month, large commercial labs, including Quest Diagnostics and LabCorp, took a week or more to deliver results. That’s too slow for many labs, including university-based facilities trying to track students on the go and all their human contacts.

“If we go beyond every three or four days testing, it’s too late.”

“Our models show that we need to test folks twice a week, in order to stem spread,” said Catherine Klapperich, bioengineering professor and director of the precision diagnostics center at Boston University. “And if we go beyond every three or four days testing, it’s too late, right? They’ve been to too many places. They’ve been around too many other people.”

At times, Alex Greninger in Seattle adopts the language of a military quartermaster, arming his troops for battle.

COVID-19 cases could spike in the fall, when the weather gets colder and more people gather indoors, public health experts fear.

At midday, I check in with Greninger again. And voila, a new testing machine has arrived — not the Roche 8800, but a model from manufacturer Thermo Fisher Scientific. Oddly, Greninger does not sound excited. There is no mention of Christmas.

That’s because each new machine brings new work. Imagine getting a new coffee maker. Now the owner has to buy beans, filters and mugs. And hire people to work everything. Oh, and produce 100 times the normal amount of coffee because lives depend on it.

“It’s really hard on the staff, on everyone,” Greninger says, “to try to maintain running 6,000 or 7,000 samples a day while you’re trying to bring on new platforms.”

Each platform, or testing system, requires specific chemicals and proprietary plastic pieces. “Juices and plastics” is how Greninger refers to them, though in medical-speak they are known as reagents. And reagents are in short supply, too, especially for university labs competing against Quest and LabCorp.

“Like every other industry, this virus, it concentrates privilege…. Larger companies are getting larger.”

“Like every other industry, this virus, it concentrates privilege in a way,” he said. “Larger companies are getting larger, and then that’s just how it is.”

It’s not just big companies. The federal government is also crowding into the space, buying testing supplies for its own priorities. In other words, the feds and the labs are not always collaborating; they’re competing. At Catherine Klapperich’s lab in Boston, she describes it going like this:

“We make a big order for something, and we get half of it,” Klapperich said, “with the explanation that ‘We’re sorry, but the government bought half of what was supposed to go on your pallet.’ ”

By midafternoon, Greninger turns his attention to the nitty-gritty of his lab’s work, which includes a meeting with consultants brought in to speed up the lab’s workflow. There are many inefficiencies: Test tubes can be ill-fitting. Samples have to be unboxed, labeled, scanned, tracked, double-checked. Then there’s disposal of samples, requiring a roomful of special biohazard disposal containers.

Does Greninger ever run out of gas?

“In June and parts of July, I just got really exhausted and had my own sort of burnout,” he says. “You start to feel a weird lack of motivation around something, even when you know you’re needed.”

“I just got really exhausted and had my own sort of burnout.”

Now, though, he says he’s energized again. The fall season could bring a surge in cases, and his lab will be more important than ever. Even if patients don’t realize it.

“People have probably never met the person who tested their sample,” Greninger says. “The doctor is the one that communicates the results, in a way takes credit for the result. And the laboratory, technicians, scientists, pathologists — people behind the scenes don’t really get to interact with the patient that way.”

With his day at the testing lab done, Greninger heads out … to do more work, at a separate research lab to learn more about the virus he and so many other medical professionals and scientists are fighting. And then he’ll be really done — at least for this day.

“I’ll walk home, or my wife will come pick me up. She’s also in a clinical laboratory over at a competing outfit. We decompress mostly by complaining about the testing process.”