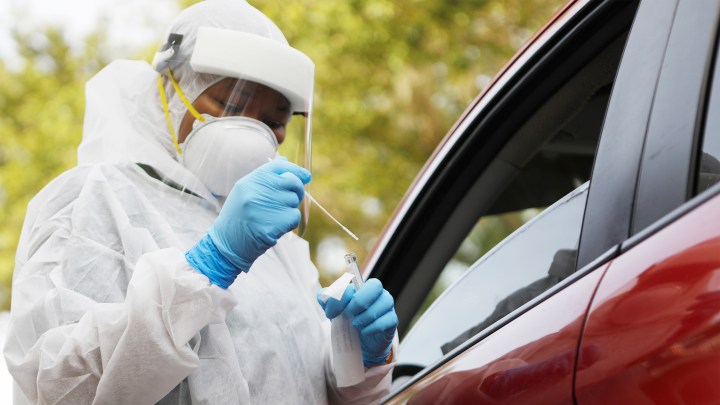 As coronavirus infections surge in the United States to nearly 50,000 positive tests daily, demand for testing is skyrocketing. And, several months into the pandemic, the country again faces critical shortages of testing machines, chemicals and specialty equipment.

At his lab and others across the country, reagents, which are used in chemical analysis, are the weakest links in the supply chain. How many reagents Greninger has dictates how many tests his lab can run. The materials arrive daily.

“You’re looking for the tracking numbers to ensure that those [testing supplies] actually went out … to handle the samples that are going to come in tomorrow.”

“Oftentimes it is actually literally just in time,” he said. “The day before, you’re looking for the tracking numbers to ensure that those actually went out somewhere to show up the next morning, to handle the samples that are going to come in tomorrow.”

Other labs report shortages of machines to run large numbers of tests. Shortages have led test sites to shut down in Sacramento, California, and Omaha, Nebraska. In New Orleans on Monday, one lab closed after two minutes when it ran out of tests. To some degree, demand for tests is simply overwhelming supply, as daily testing has ballooned sixfold since March.

Requests for tests are surging not only because infections are spiking. Large corporations and universities seeking to reopen in the fall are putting additional pressure on the system, as are sports leagues seeking to restart. Monday, at least three Major League Baseball clubs canceled workouts when COVID-19 tests did not return in time.

Nationwide, the big commercial labs report that non-urgent tests are taking longer, up to six days to turn around on average. That’s unacceptable to many public health practitioners.

“If you have a student who lives in a dorm and they are positive, you need to know immediately so you can isolate them,” said Fyodor Urnov, molecular biologist and head of diagnostic testing at the University of California, Berkeley, Innovative Genomics Institute. “Five days later, just because of the way dorms work, they will have frankly infected everybody else they live with.”

“Five days later … they will have frankly infected everybody else they live with.”

Urnov describes sourcing testing materials as a “Wild West,” with every lab for itself. He argues for a centralized, national system to buy materials at scale and distribute them across the country based on population and need.

“If you happen to be a patient of a large, well-staffed health-care organization, you can get the test,” he said. “If you happen to live in a socioeconomically disadvantaged community, even in a part of the world that’s affluent as the San Francisco Bay Area, your access to testing is much lower. “

The testing challenges have renewed calls for the federal government to take over the handling of logistics and manufacturing of products.

“That might involve [the government] taking over some of these companies and having them dedicated to developing the types of testing we need to meet demand,” said David Pride, pathologist and infectious disease specialist at the medical center of the University of California, San Diego. “In San Diego, you can get a test. The next town over, you can’t get a test. I certainly believed that by this point in the pandemic, those things would have solved themselves. They clearly have not.”

But where exactly are the bottlenecks nationwide? Clinical labs report testing data to federal agencies, but many complain of having no visibility into the system.

“Transparency doesn’t exist, so I don’t even know who to reach out to.”

“I personally have very little insight as to what data is being used for the allocation of supplies,” said Jordan Laser, medical director at Long Island Jewish Medical Center and chair of professional relations at the Association of Molecular Pathology. “The transparency doesn’t exist, so I don’t even know who to reach out to.”

The challenges come as the pandemic spreads across much of the country. Only Washington, D.C., and the state of New Hampshire are seeing cases decrease, and eight states are seeing cases maintain their levels, according to The New York Times database. Statistically, the virus is spreading everywhere else.

“Supply availability is uncomfortable, and it’s summer,” said Kelly Wroblewski, infectious disease director at the Association of Public Health Laboratories. “The worry is that when we get to fall, when respiratory viruses historically circulate more, that we will be in a worse position than we are right now.”

Currently around 600,000 Americans are tested each day, although some public health specialists say the number needs to ramp up to 20 million to enable the U.S. economy to fully reopen.