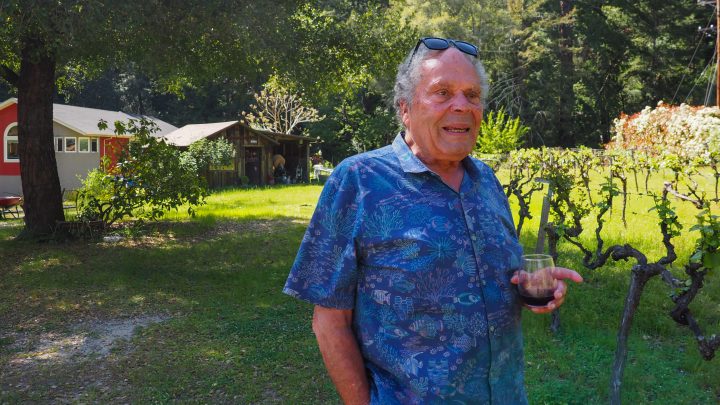 Like most everything in California, the state’s wine industry — with an estimated $43.6 billion retail sales value in 2021 — is facing another hot summer of drought and potential wildfire. But when forests burn near California’s wine country, it’s not just the flames that threaten vineyards; it’s also the smoke. Grapes exposed to wildfire smoke can produce ashy, bitter wine, forcing growers to leave millions of dollars on the vine.

Now, scientists in Santa Cruz are helping the industry confront that dilemma, with a unique approach that can sniff out the smoke in grapes. They say the results will allow winemakers to better predict whether grapes are worth harvesting or better left to rot.

“It’s a huge problem for the wine industry,” said Prudy Foxx, a viticulturist in the Santa Cruz Mountains.

That was especially true in 2020, when the catastrophic wildfire season led winemakers to cancel over $600 million in contracts with grape growers over fears that the smoke-exposed fruit would produce unsellable wine.

Phil Crews, an organic chemist at UC Santa Cruz and the owner of the Pelican Ranch Winery in Scotts Valley, looked to Australia, where winemakers have struggled with smoke impact in wine for nearly two decades. He applied a method pioneered by the Australian Wine Research Institute to California wines.

That method is unique, he said, because it provides an accurate measurement of the smoke particles in wine that lead to smoke taint.

When grapes are exposed to wildfire smoke, the ashy-tasting compounds that are absorbed into the fruit bind with sugars. Crews said the smoke particles are so tangled up with sugars, the grapes don’t even smell smoky.

That all changes once the juice is drunk. The enzymes that start to break apart food in saliva tear those molecules apart, freeing the smoke particles again and causing a bitter, ashy taste.

Directly measuring the smoke particles bound to sugar is the surest way to know how the wine will end up, Crews said. “I knew how to do it, but couldn’t quite do it in my research lab. So eventually I teamed up with the SC Labs people.”

SC Laboratories is a private lab in Santa Cruz that tests another California crop: cannabis, which it has tested cannabis in California for over 12 years. The company now has labs in both Oregon and Colorado.

“Cannabis and wine are produced in the same areas,” said Jeff Gray, the company’s CEO and founder. “And, unfortunately, they’re subject to the same environmental factors. Wildfires are now the norm here in California.”

Testing wine isn’t a core focus of the lab. But because they had the equipment and expertise that Crews needed for his study, Gray saw an opportunity to try out something new.

“I think that we’re just kind of scratching the surface,” said Paul Dorenbach, a senior analyst at SC Laboratories and a co-author of Crews’ study, which was published in March. He said they’ve measured over 250 samples between 2017 and 2021.

“As we test and geo-locate those samples, we can get a library of baseline levels for all of these wines,” he said. That library will help winemakers interpret the number they receive, placing their wine on a spectrum between heavily smoked and sparkling clean.

The methods and results from the study are available for free. Crews said he wanted to create an open-source way for more labs to replicate the analysis, so the wine industry is better prepared for the next big wildfire year.

“We want to have a lot of labs doing this rather than one or two,” Crews said.

Prudy Foxx, the grape whisperer, said that, in the end, wine all comes down to taste — and what wine critics think.

“We’re going to learn a lot about how this wine goes through the market,” she said. “If the critics choose to kibosh anything where they even detect smoke impact, that will affect the industry.”

Wine is also endlessly complex, Foxx added, and a light smoke impact might add another interesting layer — a memorial to that year’s fires. Or a bitter reminder that the wrath of climate change is growing heavier with every vintage.