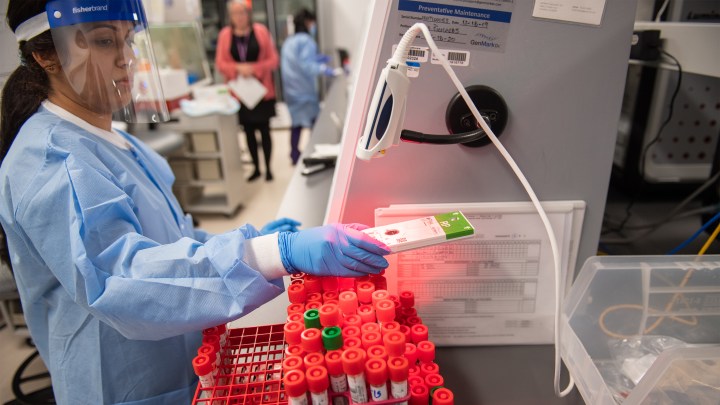 COPY
A lab technician works on a coronavirus test. Many labs pursuing other types of research went into lockdown. Andrew Theodorakis/Getty Images
COVID-19

A lab technician works on a coronavirus test. Many labs pursuing other types of research went into lockdown. Andrew Theodorakis/Getty Images
Listen Now

On March 17, Isabella Rauch got bad news. She had just a few days to shut down her immunology lab at Oregon Health & Science University in Portland, which studies how pathogens get into the body through the skin, intestines and other tissues.

That meant somebody had to euthanize over 100 mice. And Rauch had to decide which tissue cultures to toss and which might have some value in future research.

“I basically had to try and guess what is going to be the most important thing for my lab over the next couple years,” she said.

All that happened in just three days.

Lab staff are caring for the mice the team kept alive. The tissue samples they kept are stored at -150 degrees Celsius in liquid nitrogen, which introduced its own anxieties during lockdown, Rauch said.

“We were really worried that the supply chain for this would break down because it evaporates relatively fast,” she said.

Throughout the pandemic, some scientists around the world have been turning their attention to researching the novel coronavirus and the disease it causes. But pretty much all other scientific research in labs and clinics shut down as the country went into lockdown.

When social distancing came into effect, more than a dozen of Yale neurologist Dr. Kevin Sheth’s clinical trials into brain trauma were paused or shut down.

“If you have longer trial timelines, it means that the cost of the trials become increased. The whole marketing outlook changes. There are huge financial costs,” he said.

Sheth is now figuring out how to restart one trial in progress at 120 research sites across the country, each of which is subject to local health regulations.

“Right now, every center is developing their own research process for when they come online and what the local rules are,” he said.

John Roll is dean of research at Washington State University’s Floyd College of Medicine. He’s been locked out of his labs for nearly 100 days.

“That poses some trouble if you’re running an active research protocol,” he said.

Roll is worried about the effects of social distancing protocols on science.

“An active research university is such a vibrant place to be. Every day there’s conversations happening. I find it’s hard to replicate those on Zoom. A lot of that happens in the hall when you’re talking to your colleagues or friends,” he said.

At Oregon Health & Science University, Rauch is slowly getting her lab back up and running. Researchers will work staggered hours. She’ll supervise students via video. They’ll have to figure out how to sanitize a $100,000 microscope every time someone is done using it. Samples will be thawed out and mice will have to be bred, which will take months.

Then there’s the matter of money. The lab needs to start applying for grants right away, and to do that, the scientists need some sort of preliminary data they can show.

“The message from the [National Institutes of Health] and the [Food and Drug Administration] has been that they recognize, you know, what’s happening, they have reaffirmed the importance of doing research like this and I think are going to do everything they can to continue to support these trials,” Sheth said. “But it still doesn’t answer the question of where exactly is the money going to come from?”

A coalition of research universities has asked Congress for $26 billion to get research going again. And that’s if there isn’t a second wave of COVID-19 that shuts the labs down again.