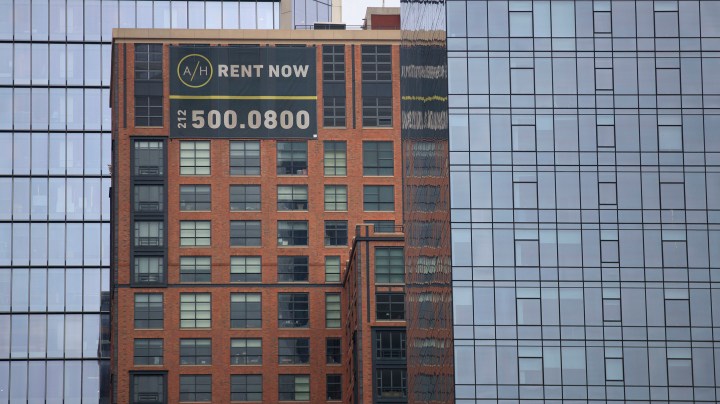 COPY
Rents were down 6.6% in Manhattan last month compared to June of 2019. Drew Angerer/Getty Images
COVID-19

Rents were down 6.6% in Manhattan last month compared to June of 2019. Drew Angerer/Getty Images
Listen Now

The pandemic is changing what American life looks like, and what American cities look like. Thousands of people have left New York since March due to COVID-19, leaving vacancies in their wake.

And what will that mean for the city’s notoriously high rents?

“There is a lower number of renters, at least until the crisis is over,” said Jonathan Miller, the author of a new report by the brokerage firm Douglas Elliman. It shows that with demand down, rents are already starting to decline — by 6.6% in Manhattan, compared to June of last year.

“There’s been fairly generous unemployment insurance with the $600 a week top-offs, which are about to expire in the next several days, leading to some sort of fiscal cliff for a lot of households,” he said.

Van Nieuwerburgh said that right now, some landlords are letting tenants live in their apartments for free, rather than evict them or lower their rents. Because if landlords lower tenants’ rents, it could make it difficult for them to refinance their mortgages.

Is it OK not to pay rent during the COVID-19 pandemic?