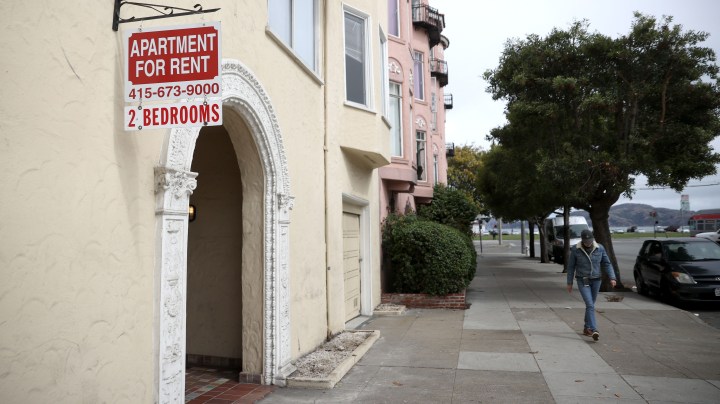 COPY
While rents in urban areas dipped during the pandemic, they're climbing back up and inspiring rental bidding wars in some markets. Justin Sullivan via Getty Images

While rents in urban areas dipped during the pandemic, they're climbing back up and inspiring rental bidding wars in some markets. Justin Sullivan via Getty Images
Listen Now

Sales of previously owned homes rose 1.4% in June, compared to the previous month, after four months of decline. Tight inventory has kept home prices high, and it’s not just prospective buyers who are feeling the heat — rents are climbing higher, too.

Cities like New York and San Francisco, generally associated with expensive rent, saw some prices come down during the pandemic. Those rents are rising again.

Jack Durham, 23, just graduated from college at the University of Texas at Austin and is now looking for a job in finance in Houston. He and two of his college buddies are also looking for an apartment there.

The market is so competitive that they’re losing out on spots listed at a price they could theoretically afford. “A big issue is there’s two or three other groups of people applying for that place. So it becomes like a bidding, like literally bidding, and the highest bidder wins,” he said.

We’ve heard about bidding wars to buy a house in a hot market … but for rentals?

The “typical” rent in the Houston area jumped almost $100 from last year to about $1,500 a month, according to data from Zillow. That’s the region’s highest year-over-year rent increase since 2015. (And higher rents, by the way, bump up economists’ inflation calculations.)

While he’s looking for that place in Houston, Durham moved back in with his parents in Dallas.

A lot of younger renters did exactly that during the pandemic, said Jeff Tucker, an economist at Zillow. “Now the reverse is happening where people are going back out, they want to get a place of their own. And it suddenly becomes a very competitive atmosphere to sign a new lease,” Tucker said.

Another reason for higher rents is that developers can’t keep up with new demand in some places.

“If you look at what cities there are good jobs, it’s really places in the south and southwest, like Houston, also places like Atlanta and Phoenix,” said Jack Liebersohn, an assistant professor of economics at the University of California, Irvine

Those cities have also seen new rental construction, and Liebersohn said that because the permitting process is fast in places like Houston, developers should be able to build new properties and rents could eventually stabilize.