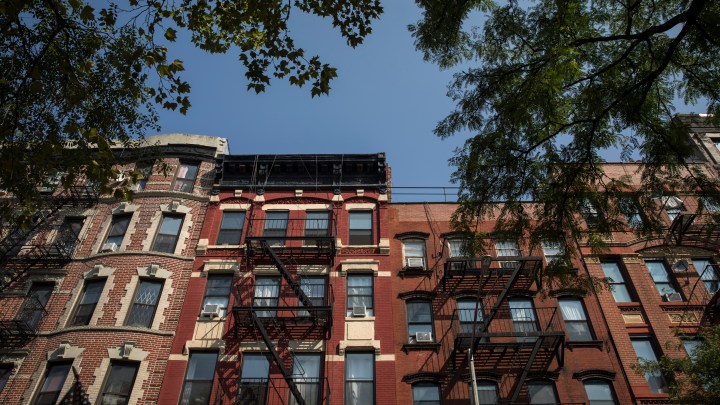 October saw the biggest yearly consumer price index jump since 1990: 6.2%. Within that, there was an annual increase in “shelter costs” — rent or the rent equivalent for homeowners — of 3.5%.

“Single-family rents are up about 10% over the last 12 months,” said Frank Nothaft, chief economist at CoreLogic.

The consumer price index looks at rents being paid right this second by people who are already in a lease — perhaps they are a month in, perhaps they’re 11 months in. CoreLogic took a look at single-family rents at their current market rate, what the new rent would be if you signed a lease today.

“And the rent growth we are seeing now is just much sharper than anything we’ve recorded previously,” Nothaft said. “We’ve seen a lot of families move out of high-rise apartment buildings, looking for single-family homes or looking for homes in low population density communities.”

The rent increases flagged by CoreLogic are just a preview of what will be showing up more and more in official inflation data as time goes on, Nothaft said.

With inflation writ large, the official buzzword is “transitory.” The Federal Reserve chair and Treasury secretary have both doubled down on the argument that the pressures pushing up most prices will fade as the pandemic fades. Semiconductor shortages, port backlogs, manufacturing problems abroad — they can and will be resolved.

That argument doesn’t stretch too far into the world of housing.

There are temporary housing supply chain problems; there’s an ever-changing parade of building materials that have become expensive or hard to find. Families wanted more space to work and learn at home because of the pandemic, although schools are now open. The economy is recovering and more people are looking to live alone.

But at the end of the day, America’s rent problem is older than the pandemic.

“We have a severe affordable housing shortage which has been developing since the housing bust in the wake of the financial crisis,” Zandi said.

The causes are legion, according to Matthew Murphy, executive director of New York University’s Furman Center for Real Estate and Urban Policy.

“Coming out of 2008 and the foreclosure crisis, we hadn’t really started to see the market fully recover until in the last few years,” he said. “And so completions of housing, placements of leases, these were still relatively low, and that’s despite the fact that household growth had actually picked up and people are living longer, having children. So our supply has not matched up with those demographic changes.”

There has been an ongoing labor shortage, and many communities have pushed back against building additional higher-density housing. Plus, the majority of new construction has been focused on higher-end housing, Murphy said — neglecting the more affordable market.

That shortage and resulting rent inflation are hitting inconsistently.

“Everything is rising, but the high-end is rising faster, and it’s ahead of the two-year-ago, pre-pandemic level,” said Jonathan Miller, president of Miller Samuel real estate appraisers.

About half of Manhattan’s apartments have a doorman. It’s an easy way to distinguish higher-end rents from lower-end rents.

For doorman apartments, “the net-effective median rent in Manhattan was $4,263 in October, which is 24.9% higher than it was a year ago … the biggest year-over-year percentage increase we’ve ever tracked,” Miller said. “But the actual rent compared to two years ago, pre-pandemic, is 8.3% higher.”

“In other words, the lower end of the market is still operating in a deficit relative to pre-pandemic levels,” Miller said.

Murphy at the Furman Center points out that President Joe Biden’s Build Back Better legislation set aside $150 billion to promote affordable housing.

“The largest driver of income-restricted, multifamily development in the country right now comes from the low-income housing tax credit. There’s provisions to expand the tax credit expenditure, the goal being that it will turn into more low-income housing,” Murphy said. There’s also an expansion of housing choice vouchers.

That is more of a long-term project. For now, Moody’s Analytics’ Zandi said the current housing inflation road we’re on is going be persistent — adding that the Federal Reserve is aware of this and will keep overall inflation above 2%, even if all those other supply chain problems get worked out.