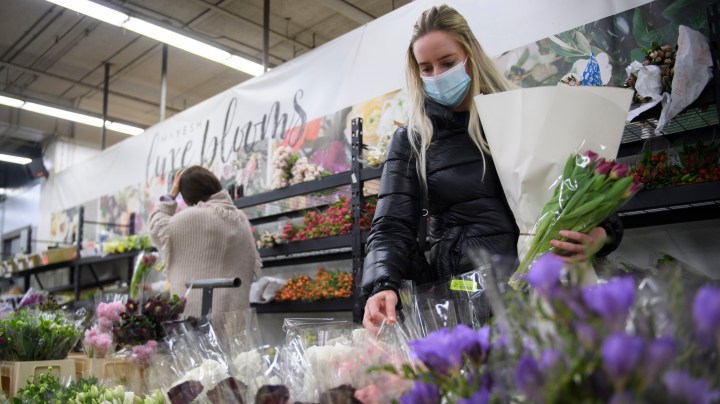 COPY
The consumer price index reached 6.2% in October. Above, a customer shops for flowers in Los Angeles. Patrick T. Fallon/AFP via Getty Images

On Wednesday, the consumer price index told us that annual inflation is at 6.2% — its highest reading since 1990. For months, though, the federal government has stuck to its view that the rumors of inflation continuing are greatly exaggerated.

Treasury Secretary Janet Yellen reiterated that idea this week in an interview with “Marketplace” host Kai Ryssdal. But what do other economists think?

Carola Binder lives in Haverford, Pennsylvania, with her husband and four young children, ages 1 to 7. Everybody drinks a lot of milk.

“We actually buy powdered milk at wholesale. So we buy it, like, 50 pounds at a time so we don’t have to worry about inflation as much because we just have everything, like, prepurchased in bulk,” she said.

Binder feels price spikes at the grocery store like everyone else. But she also knows how we got here. She teaches economics at Haverford College and her research focuses on expectations, inflation and monetary policy. What we’re seeing right now, she said, is — in part — economic psychology.

“You know, when people see prices rising faster than they’re used to, how much will they believe that it is just this temporary supply chain issue? And how much will they think that it’s something that’s more here to stay?” Binder said. “And the more they think that it’s here to stay, the more they are going to start behaving in ways that do prolong it.”

That is inflation’s self-fulfilling prophecy. But psychology aside, things are indeed more expensive.

Part of the problem is that firms are all experiencing the same supply chain issues, according to Eric Freedman at U.S. Bank asset management group.

Consumers are used to being able to choose based on price. “But if vendor one and vendor two are both going through some really significant price increases, then there are no alternatives,” Freedman said.

So, whether you’re buying whole milk or milk powder, the cost is still higher than it was last year. That’s something policymakers shouldn’t ignore, said Jay Hatfield, CEO at Infrastructure Capital Management.

“It’s not just a theoretical economic problem. This is going to be a huge problem during the winter for consumers to be able to afford gasoline, utility bills and food,” he said.

On top of that, housing prices are seeing more than 20% inflation year over year, and Hatfield doesn’t think that’s going to slow down anytime soon.