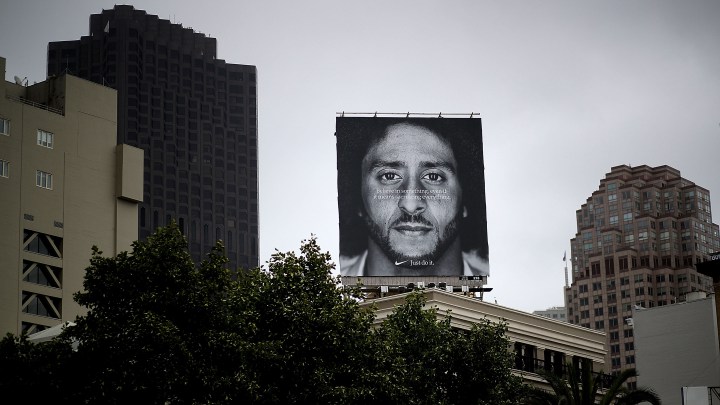 Nike reports earnings Thursday and, like most other businesses, the apparel company has taken a hit due to COVID-19 and reduced consumer spending.

But the Nike brand is arguably stronger, thanks in no small part to the company being out in front on supporting Black Lives Matter.

According to a recent Harris poll, Nike’s reputation with the general public has actually strengthened over the past two years, and there’s been renewed interest in Nike’s commercials featuring brand ambassador quarterback Colin Kaepernick. Those first ran in September of 2018.

“That advertisement was a home run even the year it ran,” said Daniel Kaplan, reporter at The Athletic. He said despite some Americans vowing to boycott the brand, that didn’t affect Nike’s numbers.

“Sales picked up for Nike after that. And its stock price has done better than its peers in the two years since,” Kaplan said.

He said Nike was out in front supporting justice for Black Americans.

But Lori Latrice Martin, professor of African American Studies at Louisiana State University said, now, Nike has to think about who’s going to star in its next commercials.

“If Nike wants to still be a viable company for future athletes, who will be the face of their brand, then they need to be on the right side of history,” Martin said.

And like all brands, Nike has to show up where people congregate, namely on social media, and it has to engage with the topics that consumers care about.