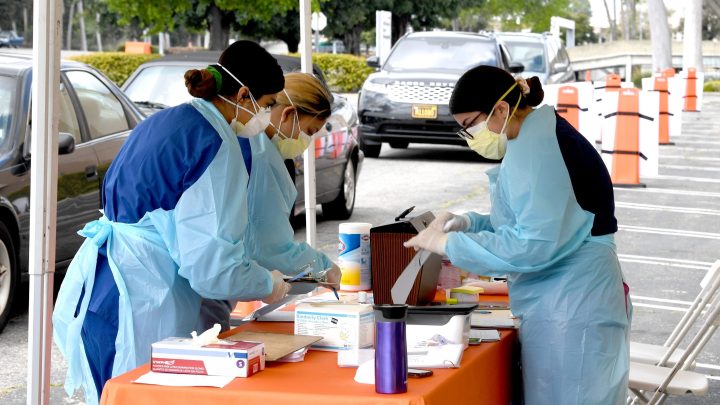 Emily Ponce, from Houston, Texas, has been trying to get a COVID-19 test for almost two weeks.

First, there was the hassle of trying to book the appointment — wait times over the phone could  last as long as half an hour and testing centers were booked for days on out. Then, there were the shortages. She’s trekked multiple times to nearby testing sites, only to get turned away after they ran out of tests.

Health insurance is supposed to cover the cost of your COVID-19 test. But Ponce, who just graduated, has none, which means her testing options are more limited.

While businesses across the U.S. are reopening, coronavirus cases are still rising. There are now more than 2.3 million confirmed cases and more than 120,000 deaths in the country, according to the New York Times. Over the weekend, the U.S. reported more than 30,000 COVID-19 cases for two straight days — the highest daily totals since May 1, according to data from Johns Hopkins University.

The ease with which people have been able to get COVID-19 testing has varied. Obstacles can include qualifying for a test at some locations in the first place; the long wait times that people like Ponce have endured (in Maryvale, Arizona, 1,000 people waited up to 13 hours at one location); living far away from a testing site; and, for drive-thru testing sites, not having an actual car.

And while COVID-19 testing is supposed to be free for those with insurance, some employer plans are still charging copays for doctor’s visits.

Right now, there are two major tests available for COVID-19. The primary one is a PCR test (typically administered using nasopharyngeal swabs), which tells you if you have an active infection. Depending on the time of testing, these tests may miss positive cases at a rate of at least 20%.

And there’s also the antibody test that tells you if you had a previous infection. It can take one to three weeks after infection to make antibodies, according to the Centers for Disease Control and Prevention.

Utibe Essien, an assistant professor of medicine at the University of Pittsburgh,  said there’s currently “little information about how sensitive those antibody tests are, and what being ‘immune’ really means.”

“We should be doing far more [testing],” said Lynn Goldman, the dean of the George Washington University Milken Institute of Public Health.  “I think that we have had a lot of  — and really continue to have a lot of — restrictions around the accessibility of the tests across our country.”

As businesses reopen, Coby Turner — an attorney at Seyfarth Shaw LLP — said a lot of employers are requiring their workers get tested. “That’s really tough to do because testing is hard to come by, which is the singular biggest hurdle,” Turner said. “Even if an employer wants to do it, they have to be fairly well connected to have a supply of coronavirus tests and have approved laboratories to process the tests.”

However, there are locations like the Brockton Neighborhood Health Center in Massachusetts that have expanded their testing to include anyone who wants to, without being subject to any requirements. They now have three testing sites, including an outdoor testing tent facility they began operating in May.

“I never thought, as a psychologist, that we would be launching a tent operation for a global pandemic response,” said Maria G. Celli, director of social services at the Brockton Neighborhood Health Center.

Celli said some of their newfound responsibilities included ensuring adequate access to PPE, assessing how many swabs they had available, and being trained on how to inform patients about their COVID-19 testing status.

As the crisis continues, some communities have been disproportionately affected. According to the Brookings Institution, among those aged 45-54, the Black and Hispanic/Latino death rates are at least six times higher than for the white population.

Without knowing who’s infected, Dr. Essien said, it’s hard to know where to distribute resources to.

Dr. Goldman said that a higher proportion of Black and Latino men and women test positive for COVID-19 compared to their white counterparts, whose tests turn out to be negative at a higher rate. To her, that suggests that Black and Latino communities are both probably at more risk for infection — but may not be getting tested unless they have a more severe form of the illness — and that there’s greater access to testing for people who are white.

While some people have encountered roadblocks in getting tested, others are having better luck. Hadley Lauren Gilpatrick from Columbus, Georgia, said  getting tested was fairly simple (although the registration process was fairly slow).

She went to the Columbus Health Department, which allowed her to get tested for free, even though she didn’t display any signs of having the virus. “I filled out a whole form, and I clicked no symptoms, I’m not at risk  — all of that,” Gilpatrick said. “And they were like, “You’re qualified. Go ahead.”

While the procedure Gilpatrick received — a nasopharyngeal swab — has been uncomfortable for some, her experience ended up being painless. “I was actually really nervous about going in at first,” she said. The results: negative.

Derek Berry, an attorney from New York City, said he pays an annual fee for a private doctor through One Medical, a direct primary care provider. He was able to book an appointment within two days through their app for both PCR and antibody tests, and got his results in less than 48 hours. (The turnaround time for tests can range from hours to a week.)

“It was exceedingly easy — much more streamlined than it is for most New Yorkers,” Berry said.

The U.S. is now reporting around 500,000 COVID-19 tests a day, which is the bare minimum of daily new tests experts say is needed to track and contain the virus. However, on a state-by-state level, some areas haven’t reached this testing standard.

“We in public health are being asked to fight this virus, this enemy, and it’s very difficult to fight an enemy that you can’t see. Testing is one way to see where it is,” Dr. Goldman said.