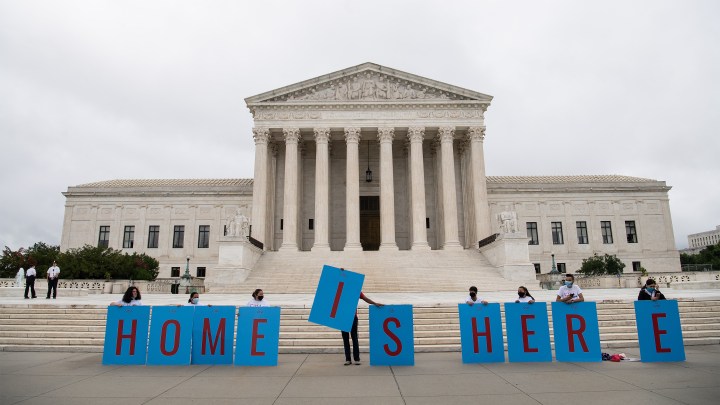 Anthoa Munoz was on a quick break from his job at Blue Bottle Coffee, a boutique coffee roaster and retail chain, when he explained that he had no idea about his immigration status until he was 17.

“I didn’t know I wasn’t from this country until I had to ask my mother for information. Apparently I came in when I was 1,” he said.

His mom is Colombian and he was born in Venezuela, but Munoz calls himself a New Yorker. He’s 29 now and works through the Deferred Action for Childhood Arrivals program, or DACA.

“Here in New York, in the States, I have a good job with good benefits with a good company. But if I were to be forced out, then where do I go?”

The Supreme Court on Thursday rejected President Donald Trump’s effort to end legal protections for hundreds of thousands of immigrants who were brought to the U.S. as children.

For now, these “Dreamers” retain their protection from deportation and still are authorized to work here.

Munoz’s status is more secure today than it was yesterday, which is likely also comforting for his employer. He is now in a leadership role at Blue Bottle and, like so many DACA recipients, could be tough to replace.

“I’ve got like six working for me that are just incredible young men and women. I mean, I don’t want to lose those people,” he said.

“Dreamers” play an important role in the American economy. The overwhelming majority are employed or in school, and they pay billions of dollars in taxes.

The Supreme Court’s decision on DACA was narrow. The Trump administration or Congress could renew efforts to end the program.

“It’s a sigh of relief, certainly, but there’s no finality to this ruling,” said Erin Corcoran, an expert in immigration law at the University of Notre Dame. “There’s no resolution. It just means that they can stay here a little longer.”

With their place a little more secure, “Dreamers,” like everybody else, can now focus on how to get through a jobs-killing pandemic and an economy in recession.