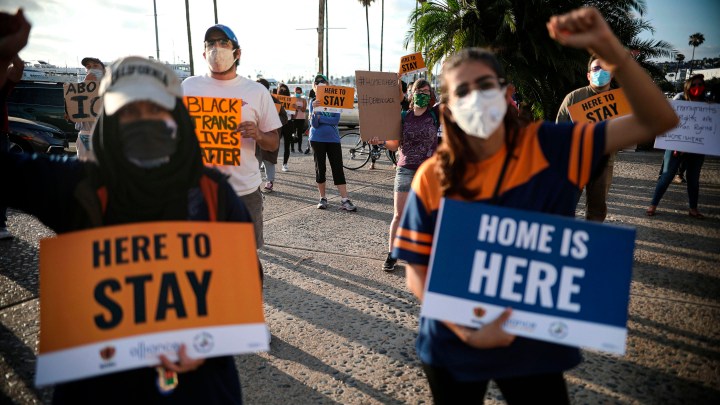 COPY
People hold signs during a rally in support of the Supreme Court's ruling in favor of the DACA program in San Diego, Calif., on June 18, 2020. Sandy Huffaker/AFP via Getty Images

People hold signs during a rally in support of the Supreme Court's ruling in favor of the DACA program in San Diego, Calif., on June 18, 2020. Sandy Huffaker/AFP via Getty Images
Listen Now

A federal judge has ordered the Trump administration to fully restore an Obama-era program designed to shield young, undocumented immigrants from deportation, the program known as Deferred Action for Childhood Arrivals or DACA.

This is certainly a victory for those undocumented young people living, studying and working in the U.S. But those immigrants still have no clear path to citizenship, so what’s next?

When she got news of the ruling, Marielena Hincapié said the reaction was pretty quick and overwhelming.

The National Immigration Law Center was co-counsel on the case, and Hincapié said the ruling not only protects those already in the DACA program, but opens it up to new applicants, something the Trump administration had shut down.

But their status is still temporary. Recipients have to renew it every two years. And DACA includes no direct path to citizenship.

Erin Corcoran at Notre Dame said the long-term solution would be immigration reform in Congress, but that’s probably not going to happen anytime soon.

“To do that legislatively, is, I think, a lot more challenging than it might even appear to be,” Corcoran said.

She said the first thing on the incoming Biden administration’s to-do list is likely pandemic relief. It’s unclear how big a priority immigration may be.