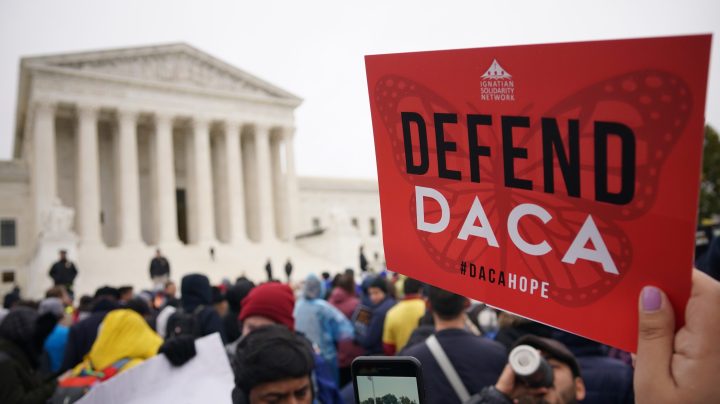 The Supreme Court’s decision to block, for now, President Donald Trump’s attempt to end the Deferred Action for Childhood Arrivals program came as a relief to people in the program threatened with deportation. DACA provides legal protections for undocumented immigrants who were young when they came to this country.

Carlos Rodriguez Cortez is one of about 700,000 immigrants protected in the United States under DACA rules. He’ll be a senior at Yale University in the fall and he says this impending decision, and his immigration status, are in the back of his mind 24/7.

“And this decision was definitely weighing on [my mind] because had DACA not been protected by the court, I would literally not be able to work after college,” Rodriguez Cortez said.

He’s happy with the Supreme Court’s decision, and he’s happy to have had DACA status for four years now. But as they celebrate the win, many DACA recipients, otherwise known as “Dreamers,” are mentally preparing for the next legal battle.

DACA recipients have to renew their work authorization every two years, and there’s a chance that the Trump administration will challenge the legality of the program again.

“It’s great that the Supreme Court did this, and it definitely helps a lot of folks, which is good,” Rodriguez Cortez said. “But, at the end of the day, I don’t think it’s enough. I still have these worries, because it being repealed later on is still a very viable thing that can happen.”

He shared his story on the “Marketplace Morning Report,” and the following is an edited transcript.

I think our status is something that’s 24/7, so it’s always in the back of our minds. And this decision was definitely weighing on it because, had DACA not been protected by the court, I would literally not be able to work after college.

It’s great that the Supreme Court did this, and it definitely helps a lot of folks, which is good. But, at the end of the day, I don’t think it’s enough. I still have these worries, because it being repealed later on is still a very viable thing that can happen.

I think this is my second time renewing DACA, the one I have currently. It’s definitely made an impact on my life, and I’m happy that it’s there. But I also acknowledge, from the four years that I’ve had it, I have to think in increments of two years. And it’s almost impossible to live life like that, fully. It’s allowed me to work and do internships, but it just really sucks.

Post-grad plans? I don’t know. I really haven’t thought about it, just because I had this in the back of my mind. I thought it’d be very cocky of me if I made plans without hearing this decision. I guess I have to think about it a little bit more.

Click the audio player at the top of the page to hear Carlos Rodriguez Cortez tell his story.