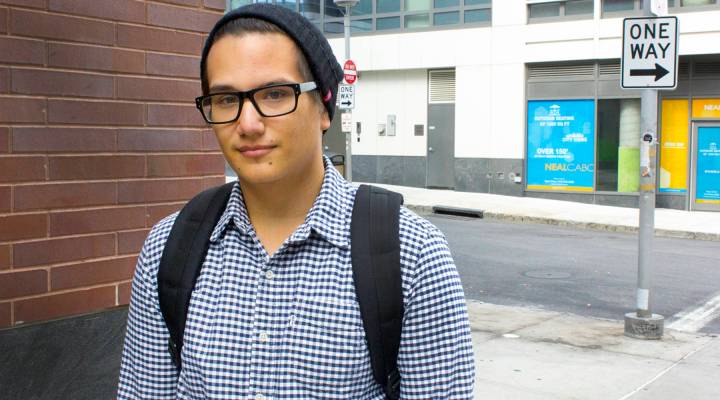 COPY
Anthoa Munoz was 17 years old when he learned that he wasn't born in United States. Now the 25-year-old is working under protections from the Deferred Action for Childhood Arrivals program. He's in the process of opening his own cafe. Peter Balonon-Rosen/Marketplace

Anthoa Munoz was 17 years old when he learned that he wasn't born in United States. Now the 25-year-old is working under protections from the Deferred Action for Childhood Arrivals program. He's in the process of opening his own cafe. Peter Balonon-Rosen/Marketplace
Listen Now

Anthoa Munoz knows exactly what his business will look like: cafe by day, speakeasy-style bar by night.

The 25-year-old is currently seeking out retail spaces across Brooklyn and Queens, New York. He said he’s gathered 70 percent of the investment needed to open and already plans to rapidly expand. His dream is coming together.

But there’s one catch. Munoz, like 800,000 people across the country, has work status under the Deferred Action for Childhood Arrivals program, or DACA. The program was created by the Obama administration to shield children brought to the U.S. from deportation and allow them to receive work permits. DACA recipients must reapply every two years.

With the Trump administration’s announcement that they plan to end the program, Munoz’s future now teeters on the brink of the unknown.

“I can’t spend every little moment worrying about my status or how long I will have it because if I spend too much time worrying, I won’t get anything done,” Munoz said. “I can just make the best of what I can now.”

Out of all DACA recipients, 91 percent are employed and 5 percent have started their own businesses, according to the Center for American Progress. And like all of those people, Munoz’s story — one that’s possible thanks to the business world — starts outside of America.

When Munoz’s mother was young, he said, she ran away from her home in Colombia and moved to Venezuela. Soon enough, his mother planned to move to the U.S.

“She wanted me to born here,” Munoz said.

But things didn’t work out as planned. Munoz was born in Venezuela. His mother brought him to the U.S. on a visa at age one.

And here, on U.S. soil, Munoz began the only life he’s ever known. He grew up in Elmhurst, Queens and attended a high school where he specialized in information technology. There he found a passion for science and set his eyes on college.

“When I thought I had a world of possibility ahead of me, I was actually shooting for a physics major,” Munoz said. “My heroes were Neil deGrasse Tyson, Michio Kaku. That was my thing, I really wanted to be in science.”

At age 17, that all changed. It only took one question. Munoz asked his mother for his social security number so he could apply for financial aid.

“She basically said ‘You don’t have that,'” Munoz said.  “And she explained the whole situation to me.”

The Promise of DACA

Without financial aid, Munoz couldn’t afford the cost of college. So he took his passion for academics and turned toward the business world. He channeled that drive into the only jobs he could get: those that paid under the table. As his friends went off to college, he worked at restaurants, designed a website for a jewelry store, worked at a shoe store.

Then in 2012, then President Barack Obama introduced the DACA program. At first, Munoz was skeptical. He worried that applying would put him and his family on the government’s radar. But he also saw the benefits.

So Munoz applied and paid the $495 fee for DACA registration. A few months later he received a little blue card allowing him to work.

“As soon as I got that I was like ‘I can start catching up, I can start working towards my future,'” Munoz said. “It made me feel like a person, really.”

How the business world helped

With work permit in hand, Munoz got a job at Blue Bottle Coffee, a boutique coffee roaster and retailer chain. But as it came time to renew his DACA status, he needed money to again pay the fee. So he asked his manager for a few extra shifts and explained why.

Before Munoz knew it, his story spread to the CEO of the company.

“The CEO was in town and he personally spoke to me,” Munoz said. “I told him I needed this money to help with my fees, and he just went with it.”

The CEO, Munoz said, helped him get the money he needed. And as Munoz continued to work at the cafe, he also set his sights on his own venture.

These days things are hectic. When Munoz isn’t at his day job, he’s meeting with investors, scouting out locations and viewing furniture for his soon-to-be cafe.

Munoz is trying not to let the announcement about the government ending DACA faze him. His work permit expires in April 2019. And he’s plenty busy trying to get his cafe off the ground. But if things change with his immigration status, Munoz plans to act accordingly. He said he would consider selling the cafe in the future, if he had to.

“If the worst comes to worst and I can’t live here anymore, at least I will have some money aside for wherever I have to go,” Munoz said.

Still, he worries. If he were deported back to Venezuela, he’d be somewhere he hasn’t been since he was one.

“I grew up here, I didn’t know I wasn’t a citizen,” Munoz said.”I’m very disconnected with [Venezuela] as my home country.”

For now, he’s focusing on his business venture and looking to lock down locations for the additional cafes he plans to own.

And it’s his passion from high school that still drives him. If he can’t go to college and work in science, he hopes to make enough money to support those in that field.

“I can be the person who they come to for grants to support science,” Munoz said. “That’s basically my drive to make money, so I can help those in the science field.”