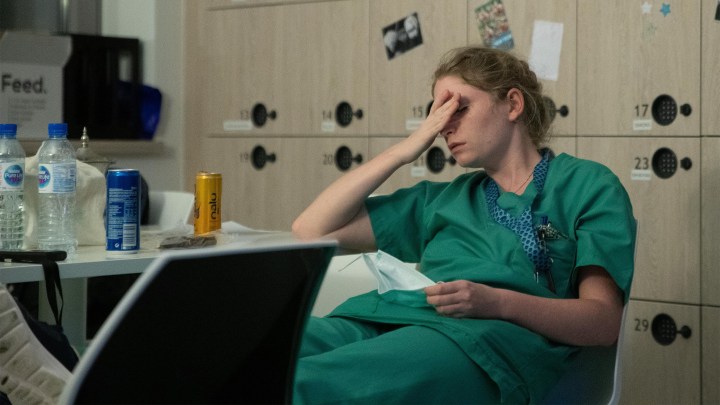 So much about our lives has been upended since the pandemic began: our social lives, our work lives and, for many of us, our sleep. That can make it tough to get work done as sleep deprivation exacerbates distraction and fatigue.

Dave Bittner hosts a series of podcasts about cybersecurity in Baltimore, and before the pandemic, he was a champion sleeper. He’d conk out immediately when his head hit the pillow.

“There could be a marching band that could go by outside my window, and I would sleep right through it,” he said. “At the moment, those days are gone.”

Almost every night lately he wakes up around 2 or 3 a.m., frantically checking his phone for news updates on the virus. He’s been having recurring anxiety dreams in which he’s stuck back in high school and failing his classes.

“It’s hard to describe more than that because of the way dreams are,” he said, “but I often wake up in the morning and I don’t feel well rested.”

That makes focusing on work more difficult and wears his patience down, which stresses him out even more.

Sleep deprivation can create a vicious cycle of anxiety and loss of productivity, says Chris Bailey, author of the books “The Productivity Project” and “Hyperfocus.”

“Lack of sleep is the single most common trigger for an episode of anxiety,” he said. “So you can look at these topics kind of like a web — they’re kind of stars that orbit one another.”

Lately there are a lot of pressures forcing those stars out of alignment. For millions of people, the sudden switch to working from home has been hugely disruptive.

Nguyen Pham is pursuing a Ph.D. in neuroscience at the University of Utah. His work is taking over an ever-growing part of the day, interspersed with cooking, napping and going down Reddit rabbit holes, while he sleeps just a few hours a night.

Resting in dribs and drabs like that is not the same as a “good night’s sleep,” said Matthew Carter, a biology professor who specializes in sleep science at Williams College.

“Sleep fragmentation is a real problem,” he said. “It basically reduces the quality of all the great restorative functions that happen when a person is sleeping, and we have a harder time remembering things, we have a diminished cognitive capacity, which makes it harder to make good decisions.”

Carter is a sleep expert, but of course that doesn’t make him immune to a little sleep deprivation. During the day he’s helping home-school his kids, and then he works into the night, getting less shut-eye than he knows he needs.

“On the really bad nights, it could be four or five hours. But I’ll be honest— it’s maybe even less than that,” he admitted.

He tries to make up for it the next day by sleeping in. And there are clues that’s a common experience. Global electricity patterns seem to indicate that people are staying up later, sleeping in longer and taking breaks in the afternoon, perhaps to take a nap.