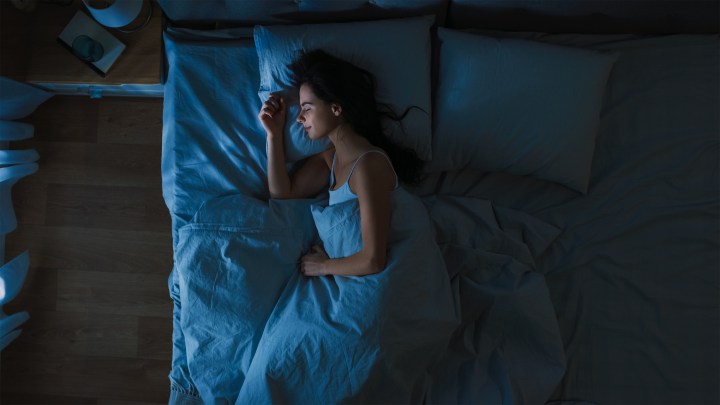 COPY
The U.S. market for weighted blankets is about $220 million a year, but it's just a slice of a much bigger sleep market. Gorodenkoff/Getty Images
COVID-19

The U.S. market for weighted blankets is about $220 million a year, but it's just a slice of a much bigger sleep market. Gorodenkoff/Getty Images
Listen Now

Even before the pandemic, Kat Hazzard was well acquainted with the struggle for a good night’s sleep. Stress and anxiety frequently kept her up at night. Then a couple years ago her dad got sick and she was really worried.

“And one day, I got home from being at the hospital all day, and I saw an Instagram ad for a weighted blanket,” she said. “I was just like, ‘That’s it. I’m getting one.’”

What she got was 18 pounds of tiny glass beads, sewn into a queen-size cotton quilt. When the box arrived she could barely get it in the door.

“I sort of had to fireman carry it up the stairs on my back,” she said. “But my first night sleeping under it was a game changer.”

Calm. That’s the selling proposition for what seems like a gazillion brands of weighted blankets that have piled into the market in recent years. There’s Gravity Blanket, SensaCalm, Layla and Bearaby among others, all promising to soothe stress and promote better sleep. Much of the marketing alone could put you to sleep, with its dreamy music and soft-spoken promises of serenity. This ad from Therapedic, for instance, is voiced over a waterfall of spa-like music and describes how the blanket “evenly distributes the weighted beads, simulating deep-touch pressure [and] mimicking a gentle hug.”

The pandemic has given their pitches new currency, as more Americans report signs of anxiety and depression. In late May, Hush Blankets published a blog post with the headline: “Why You Need a Weighted Blanket Now (During a Pandemic) More Than Ever.”

The post went on to spell out all the reasons to be freaked out: “Anxiety. Stress. Worry. Fear.” And assure readers they are not alone.

And apparently, they’re not.

“Based on Google data that we have on volume of searches, we’ve seen a 47% increase in sleep-related search terms since March,” said Elizabeth Grojean, founder of Baloo Living.

Grojean entered the weighted-blanket arena in 2018 after trying one out herself.

“It was this feeling like that my toenails were relaxed,” she said. “I didn’t know I could be that relaxed.”

Baloo’s gauzy Instagram ads feature bare-shouldered models blissfully relaxing their toenails under plush white cotton. No remote-schooling kids or Zoom meetings in sight. Baloo’s blankets run from $150 to $200, at the higher end of the market.

Business was growing even before the pandemic, Grojean said, “but then April, May, June, we saw almost doubling of sales.”

The U.S. market for weighted blankets is about $220 million a year, according to Andrew Csicsila, a retail consultant with AlixPartners. But it’s just a slice of a much bigger sleep market, where our collective search for a restful night has also boosted sales of mattresses, pillows, sound systems, anything that might help.

“There’s a handful of companies out there that are really taking advantage of this and seeing the opportunity in this market and are doing quite well,” Csicsila said.

That’s been hard for Keith Zivalich to watch. He started selling weighted blankets in 1998, catering to kids with autism and other special needs who found the pressure calming.

“Then the moms were thinking, well, this might feel good on me,” he said.

There is some science to this. Gentle pressure can unleash feel-good hormones, like oxytocin and serotonin, and reduce stress-induced cortisol.

Sales of Zivalich’s Magic Weighted Blanket grew over the years, but lately competitors with slicker marketing, or lower prices, have crowded the market. His company did get a boost in the spring when the lockdowns began.

“But then the summer months started to catch up, and people have been out of work longer, and the economy’s tanking,” he said. “We have definitely felt it.”

Kat Hazzard’s been feeling it, too. She’s still working as a compliance consultant for Kaiser Permanente in Seattle. And Seattle was a pretty stressful place to be at the beginning of the pandemic when the city was an epicenter.

“I was finding that that 18-pound weighted blanket just wasn’t enough,” she said.

And it’s not just the pandemic. As a Black woman, Hazzard said, “all the racial strife that’s been happening, especially since May, has taken a toll for sure.”

She recently upgraded to a 25-pounder — the heaviest blanket she could find. It’s working for now, she said but if things get worse, she may have to double up.

CORRECTION: An earlier version of this story incorrectly spelled the name of Elizabeth Grojean. The text has been corrected.