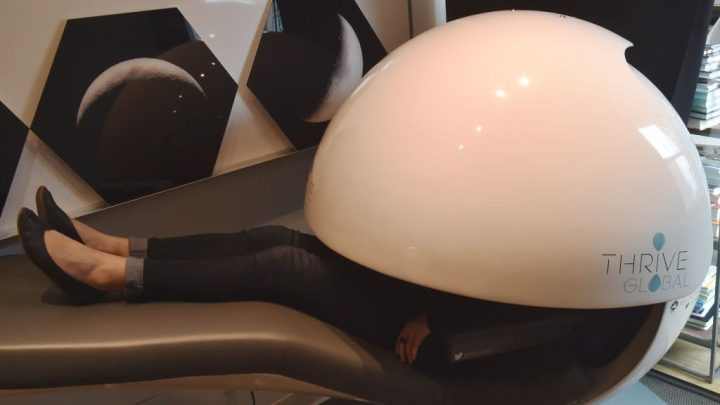 COPY
An "energy pod" is seen at the company Thrive Global, in New York, on May 10, 2018, which Thrive Global employees can use to take a nap. Hector Retamal/AFP via Getty Images
Workplace Culture

An "energy pod" is seen at the company Thrive Global, in New York, on May 10, 2018, which Thrive Global employees can use to take a nap. Hector Retamal/AFP via Getty Images
Listen Now

Research from the Centers for Disease Control and Prevention shows a third of American adults don’t get enough sleep, and companies are starting to wake up to the ways tired employees hurt business.

The pernicious effects of sleep deprivation haven’t traditionally been a focus of the corporate world, outside of industries where safety is a concern said Chris Barnes, a management professor at the University of Washington.

“Maybe not as dramatic as having a nuclear meltdown or a bunch of people crushed in the workplace,” he said, “but we’re still suffering a lot of the same effects in boring white-collar office jobs.”

His research shows sleep-deprived workers make more mistakes, are less engaged, less creative, make less ethical decisions and are more likely to act like jerks, all of which adds up to a significant problems in the workplace.

Wendy Troxel, a behavioral scientist with the Rand Corp., co-authored research that found lack of sleep in the U.S. contributes to more than a million lost workdays per year resulting in a drag on gross domestic product of more than $400 billion.

“This idea that sleep is a thing we sacrifice to increase our productivity and get more done is a mortally flawed belief,” said Troxel.

More businesses are starting to pay attention to the importance of sleep, adding nap pods to offices or imposing restrictions on after hours communication.

Mike Kisch is the founder of Beddr, a sleep health workplace program that uses tracking and coaching to help workers get better rest. He said he’s seeing increased interest in offering the benefit in industries like media, tech and finance.

“I think they’re really starting to understand how poor the sleep health of their employees are and how that’s contributing not only to lower productivity but it’s increasing their overall health care costs,” he said.