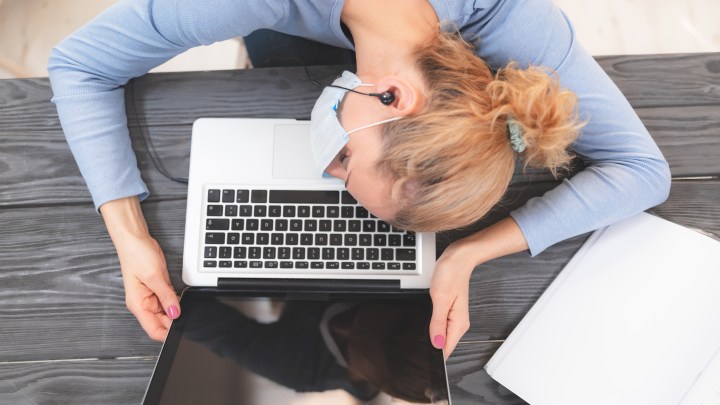 Right now, more than a third of Americans are feeling anxious and losing sleep as a result, according to the most recent Marketplace-Edison Research Poll. m-gucci/iStock via Getty Images
Economic Anxiety Index®

Right now, more than a third of Americans are feeling anxious and losing sleep as a result, according to the most recent Marketplace-Edison Research Poll. m-gucci/iStock via Getty Images

According to data from the most recent Marketplace-Edison Research Poll, this fall more Americans are losing sleep over their financial situation.

It’s been years since Holly Niehoff has easily gone to sleep, for example. The 47-year-old lives in Morgan County, Kentucky. Every night, she lays down and has a lot running through her mind, she said.

That includes her husband, who is on disability, and her responsibilities at her job in risk management at Morehead State University. Niehoff said the pandemic has made it even harder for her to sleep.

“Trying to juggle finances for my household on my salary alone for a while, and also trying to keep my kids in school,” she said.

So sometimes it takes an hour, sometimes more, for Niehoff to fall asleep, and she doesn’t always feel rested in the morning

“I do feel kind of tired sometimes throughout the day and just kind of worn out with everything,” Niehoff said.

Sleep is often affected by social and economic circumstances. Pandemic stresses are making that clear.

“If you are anxious or worried about something, you can’t fall asleep. You have to stay awake to kind of plot or think about how you can fix the future,” said Lauren Hale, who researches sleep at Stony Brook University.

Right now, more than a third of us are feeling that way. It’s not restful.

“If you know the future is going to be OK, you don’t have to be on guard,” Hale said.

“Financial stress and worry is a major contributor to sleep loss. Sleep loss can then lead to lost productivity. Lost productivity — you know, there can be this sort of vicious cycle that ensues,” Troxel said.

Those with low incomes, people of color and women were economically vulnerable before the pandemic. Now, Troxel said, they’re also more likely to lose their jobs.

“The most vulnerable in the pandemic are experiencing financial concerns and that is certainly leading to sleep disturbances as well,” she said.

Troxel also said sleep disturbances aren’t just bad for workers, productivity and the economy. They’re also bad for our health. And that, too, can get expensive.