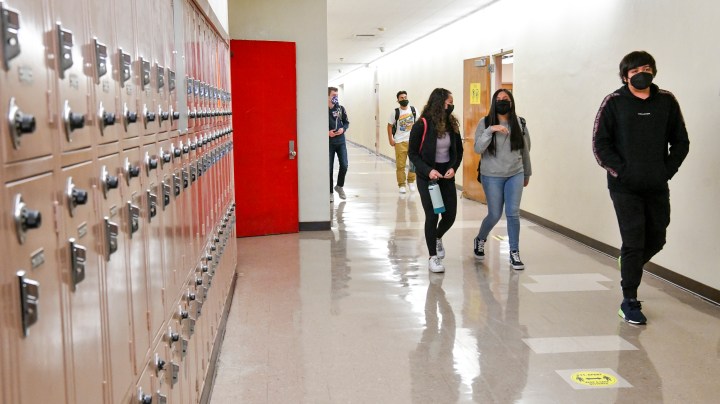 COPY
Starting the school day at 8:30 or earlier isn't best for many students' ability to learn, but sending them home at a later time may disrupt family life. Rodin Eckenroth/Getty Images

Starting the school day at 8:30 or earlier isn't best for many students' ability to learn, but sending them home at a later time may disrupt family life. Rodin Eckenroth/Getty Images
Listen Now

If you’ve been around teenagers in the morning, you know it is not their peak time of day. Yet more than 80% of public high schools in this country have their first bell before 8:30 a.m., according to the National Center for Education Statistics.

For years, scientists and pediatricians have been pushing for a later start time.

In some districts, change has already come, or it’s coming this fall. Philadelphia announced this month that its high schools will move their start time to 9 a.m. In California, state law mandates a start time of no earlier than 8:30.

There are historic and economic reasons for starting the school day early.

So dark that she got them headlamps for their walks to the bus stop. “They’re like little miners. You know, they’ve got a little lamp on their forehead.”

Williams said usually the kids will only hold the headlamps, not wear them. (They’re too cool for that.) They have to leave the house at 6:25 to be on time for their first classes at 7:30 — and it’s a struggle.

“They’re very tired almost all of the time,” Williams said.

“Biologically, it’s harder for them to go to sleep earlier,” said Rhoda Au, a professor at Boston University. She studied adolescent sleep patterns with the American Academy of Pediatrics.

“Around the time of puberty, their internal clock, which is driven by their melatonin levels, right shifts, and this shift is creating a delayed sort of sleep phase,” she said.

Au said some schools rotate the first class of the day so students won’t always be trying to learn the same subject during their sleepiest time. The reason so many schools start early has to do with the way we used to work, she added.

“It comes back to when we were much more an agrarian community, right? We just have locked ourselves into this early to bed, early to rise.”

But that means they’d get home later. He said in his school district — where there’s a lot of single-parent households — that won’t work.

“So many of our high school kids are the caregivers for their elementary siblings,” Laurrie said.

Even if release times lined up, Laurrie is dealing with a bus driver shortage, so there wouldn’t be enough drivers to transport the high schoolers and the younger kids at the same time.