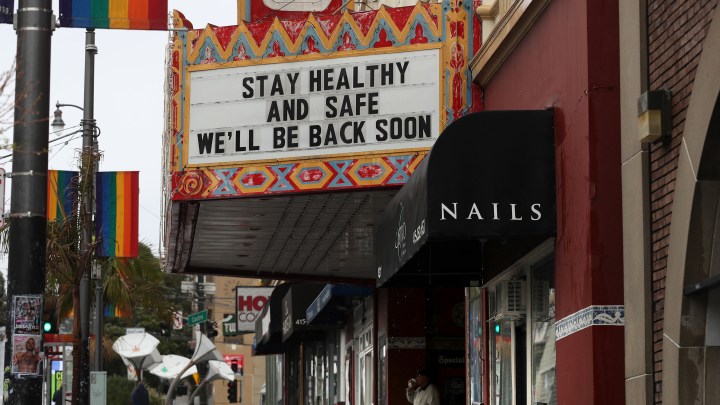 COPY
The closed Castro Theatre in San Francisco on March 15. More than half of Americans fear losing their jobs over the next 12 months, according to the latest Marketplace-Edison Research Poll. Justin Sullivan/Getty Images
Economic Anxiety Index®

The closed Castro Theatre in San Francisco on March 15. More than half of Americans fear losing their jobs over the next 12 months, according to the latest Marketplace-Edison Research Poll. Justin Sullivan/Getty Images
Listen Now

Herve Mompoint has a routine that helps him get to sleep. He drinks chamomile tea and then lies down in bed and pulls up the most boring video he can find on YouTube.

But the other night, even that didn’t do it. At 3 a.m., he was wide awake, pacing the room, thinking about work.

“I couldn’t sleep. I couldn’t eat. For a good while, it felt like if I sat down and took a breath, I was just going to explode,” he said.

Mompoint works at an engineering firm in Charlotte, North Carolina. Ever since he started working from home during the pandemic, his productivity has fallen. He gets distracted easily by his dog and household chores. Also, the software his company uses hasn’t been working right.

“And that’s taken an even harsher toll on my production rates,” he said. “I keep getting emails about my production numbers being low — and it’s kind of put me in a state of panic.”

Mompoint thinks he might lose his job, and he’s not confident that he would find another one in this economy.

More than half of Americans are afraid of losing their jobs over the next 12 months, according to our latest Marketplace-Edison Research Poll. That percentage is even higher for Black and Hispanic or Latinx workers.

And living in fear of unemployment, especially during a pandemic, when there are plenty of other reasons for anxiety, can take a huge psychological and emotional toll.

Rodrigo Eymael works in sales for a company in Massachusetts that programs pharmaceutical and biotech conferences.

“There’s just an incredible amount of uncertainty right now as to when we’re going to be able to go back to having actual revenue from live events, which is probably 90% of the revenue for the company,” Eymael said.

He’s survived a few rounds of layoffs, but he worries he’ll be next. It’s becoming hard to function — especially because he’s a single dad with a daughter to support.

“For the past couple of weeks, I’ve been completely paralyzed,” Eymael said. “I really don’t know where to put my efforts and how to make myself valuable to the company.”

He finds himself meditating and exercising a lot to cope.

“I used to do these things for wellbeing, and now it feels like I’m doing these things just to keep my head above water,” he said.

For some people, this moment of financial uncertainty also brings grief. Cecilia Feeley runs the Rutgers University transportation autism project, which looks for ways to make public transit more accessible for people with autism. Because of the pandemic, the funding has run dry and her hours were just cut. She fears the program will disappear entirely.

“I guess I just feel a lot of sadness and almost like a loss of something,” Feeley said. “Because I helped create it. It wasn’t really just a job. It was, kinda like, you know, my baby or something, that I feel like is slipping away.”

Feeley, who is a transportation engineer, started the program 10 years ago when her son, who’s now 21, was diagnosed with autism.

“I know that there’s still a lot of need for the population,” she said.

There’s not one easy answer for how to get through this kind of fear and grief. Therapists say some things can help: meditation, long walks, whatever brings you at least momentary peace or joy. And maybe it helps to remember that what you’re feeling is not surprising, given the circumstances — and that there are a lot of other people up at 3 a.m. right now.